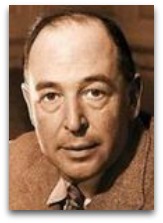 In 1942 to 1944, Lewis gave a series of BBC radio talks on Christian apologetics, published as Mere Christianity (1952), most of which is an attempt to rebut or fortify the argument from morality. [2]

Natural laws | Education
In 1943, Lewis, in his The Abolition of Man, in an appendix, and later in his That Hideous Strength (1945), argued, thematically, that there are natural laws and objective values, which education should teach children to recognize. (Ѻ)
Choice | Choiceless
Lewis seems to premise his entire argument on the argument that humans have a natural ability to choose between "right" and "wrong" whereas everything else in the universe is lacking in this peculiar nature; which he states as follows:

Namely, that all entities, namely: humans, animals, vegetables, or "inorganic things", as Lewis says, must obey the various physical laws, such as gravitation, for all four, or genetic biological laws, common to the organic group, as he says, but there is one law, he says, which is "peculiar to humans", not applicable to animals or vegetables, namely "choice" to obey or not obey the law of right and wrong of human nature. Lewis, following digression on the Nazis model of right and wrong, how differing cultures throughout time, e.g. Egyptians, Babylonians, Hindus, Chinese, Greeks, and Romans, each had different hues of morality (which he says he summarized in an appendix of his The Abolition of Man), then jumps to:

“It seems, then, we are forced to believe in a real right and wrong. People may be sometimes mistaken about them, just as people sometimes get their sums wrong; but they are not a matter of mere taste and opinion any more than the multiplication table.”

Collins | Stem cells
Lewis was influential to Francis Collins, who states that he culled his theory of “universal morality”, as described in his 2006 The Language of God: A Scientist Presents Evidence for Belief, that after evolution had prepared a sufficiently advanced “brain”, that at some point God gifted humanity with the knowledge of good and evil, what he calls the “moral law”, with free will, and an immortal soul, and that some humans use their free will to break the moral law, leading to an estrangement from god, for which Jesus is the solution—from Lewis’ The Chronicles of Narnia, in some way.

Collins, who in 2010 was the head of the NIH, the largest scientific research funding provider in the world, banned stem cell research, based on his Lewis-conceptualized system of morality, per the reasoning that the “soul enters the zygote” at or very near the moment of conception, sometime before embryo reaches the 150-cell-state, and therefore it is immoral to use embryos for stem cell research.

Other
In 2011, American deconversion philosopher Christopher Redford did a short a tongue-in-cheek critique of Lewis’ Mere Christianity. (V)

“Let’s focus on that one statement: ‘love is a chemical reaction’. That’s an incredibly deep statement and I think it’s a lie from the pit of hell.”

Quotes | By
The following are quotes by Lewis:

“Supposing there was no intelligence behind the universe, no creative mind. In that case, nobody designed my brain for the purpose of thinking. It is merely that when the atoms inside my skull happen, for physical or chemical reasons, to arrange themselves in a certain way, this gives me, as a by-product, the sensation I call thought. But, if so, how can I trust my own thinking to be true? It’s like upsetting a milk jug and hoping that the way it splashes itself will give you a map of London. But if I can’t trust my own thinking, of course I can’t trust the arguments leading to atheism, and therefore have no reason to be an atheist, or anything else. Unless I believe in god, I cannot believe in thought: so I can never use thought to disbelieve in god.”

— C.S. Lewis (c.1950), an argument for the existence of god (Ѻ); supposedly has something to do with Lewis’ earlier “argument from reason”, defended in his 1947 Miracles: a Preliminary Study, wherein he cited John Haldane’s 1927 quote: “If my mental processes are determined wholly by the motions of atoms in my brain, I have no reason to suppose that my beliefs are true ... and hence I have no reason for supposing my brain to be composed of atoms.” [3]

“Some people draw unwarranted conclusions from the fact that I never say more about the blessed Virgin Mary that is involved in asserting the ‘virgin birth’ of Christ. But surely the reason for doing so would be obvious? To say more would take me at once into highly controversial regions. And there is no controversy between Christians which needs to be so delicately touched as this.”