In hmolscience, a CPK human molecule is the depiction of a human, atomically, as a N-element human molecule, human chemical, or human chemical species, where N is from 2 to 26 types of atoms, using the 1952 CPK coloring scheme, where individual atoms are labeled such that: red = oxygen, blue = nitrogen, gray = hydrogen, black = carbon, among several other color assignments. [1]

The letters CPK, is acronym of the surnames of chemists Robert Corey, Linus Pauling, and Walter Koltun, the inventors of the atom color coding system.

History
The first proto-type CPK human molecule depictions, so to speak, were the various hole-filled molecule man drawings and multi-story sculptures made American sculpture artist Jonathan Borofsky, first built in Los Angeles, in 1977 and 1978, originating because, as Borofsky says: [1]

“I was fascinated by this ‘molecule idea’, the simple fact that even though we appear to be quite solid, we are in fact composed of a molecular structure which in itself is mostly composed of water and air.”

The holes, varying in size from about seven inches to one foot or more (depending on sculpture), are indicated by the following idea:

“Holes represent the molecules of all human beings coming together to create our existence”.

In theory, then, expanding or rather upgrading this "holes = molecules" model of a human, one could then extrapolate on this statement to make a CPK model of the atoms of a human, where each color represents the representative atoms that actually exist in people.

The first actual CPK human molecule was the 3-element nitrogen-oxygen-hydrogen made in 2005 by Canadian designer Shawn LaPaix for a poster “The Human Body in History” made for the University of British Columbia Art Gallery exhibit. [2]

In 2009, although it seems unaware of the previous work of LaPaix, American illustrator Chris Gash made 2-element nitrogen-oxygen (blue-red) CPK human molecule in the form of a running stick figure, as an illustration for a New York Times article on walking walking molecules. [3]

Full CPK depictions
See also: Human molecular orbital
One of the limitations of the CPK human molecule depiction is that humans, according to mass composition tables, and recent human molecular formula calculations, are made of 26 functional elements:

hence a 26-color coded representation of the human as a "molecular formula in action", in the prophetic 1919 word of American physician George Carey. The following, for example, would be the coloring scheme according to the popular molecular visualizer jmol:

This would be a bit tricky to visually depict a human via this color coding scheme, but nevertheless possibly a good introductory hmolscience "homework assignment" would be a classroom poster project assigned to children as a way to learn both the philosophical implications of notion of the human as a reactive molecule and also to learn the general location and function of each element in the body. 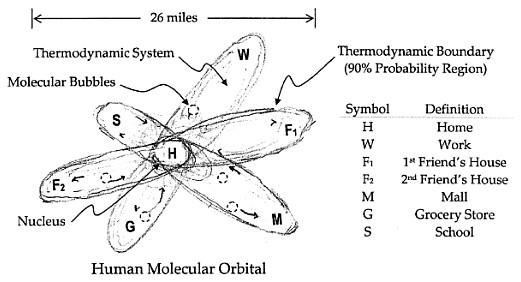 One example of this approach is that taken by English biotechnologist Mark Janes and his "Mr. Carbon Atom" outfit, above left, wherein he uses part metaphor, part analogy, part extrapolation, and part scientific concept, to model a human as a type of evolved carbon atom.