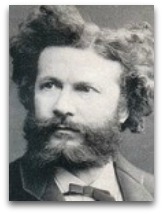 In hmolscience, Camille Flammarion (1842-1925) was a French astronomer noted, in literature thermodynamics, for his 1893 heat death themed science fiction novel The End of the World.

Overview
In 1893, Flammarion, in his The End of the World (La fin du Monde), a philosophical thermodynamics-themed science fiction, about a comet colliding with the earth, in his final chapter, pictorially presents dismal heat death end view of life, shown below—the pictures captured “the wretched human race will freeze to death” and “this will be the end”, respectively: : [1]

Flammarion’s illustrator, in short, gives two dark pictures of the end of humanity based on thermodynamic speculation: [2]

In two wide-spread German history of science textbooks, these pictures are given as an illustration of the pessimistic conclusions nineteenth century physicists (among them Hermann von Helmholtz) had drawn from the second principle of thermodynamics. They believed that in a remote future, the entropy of the universe would grow to a maximum, and all available energy would be transformed into heat.

This apocalyptic vision was often called "heat death", but as the average temperature would then be very low, the expression "cold death" was used as well. [3]