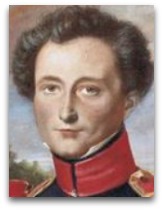 In existographies, Carl Clausewitz (1780-1831) (IQ:155|#605) [RGM:226|1,500+] (GMG:9) (CR:9) was a Prussian general noted for his moral, i.e. “moral force”, and romantic theory of warfare, who in his 1832 posthumously-published treatise On War, used the principle of friction to distinguish real war from the mechanical, Newtonian world. [1]
Thermodynamics
Puzzlingly, there exist a number of publications making seemingly anachronistic statements that Clausewitz, in his work, employed some type of “thermodynamic” logic in his friction theory based war theories, in the years when thermodynamics just in initiation (Sadi Carnot, 1824) and not yet even founded (Rudolf Clausius, 1850) or coined (William Thomson, 1854) for that matter. [2] English complexity theory economist Antoione Bousqute, in 2008, to cite one example, stated the following: [3]

“Thermodynamic thought also expressed itself in the writings of Carl von Clausewitz who recognized the essentially dynamic and irreducibly unpredictable nature of war, and theorized the inevitable friction and fog inherent in military operations.”

Investigation will be needed to determine the roots of the assertions.

“War is a continuation of politics by other means.”