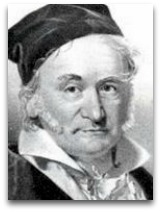 In existographies, Carl Gauss (1777-1855) (IQ:190|#24) (Cattell 1000:848) [RGM:39|1,500+] (Murray 4000:4|M) (GME:2) [LPKE] (CR:73) was a German child prodigy turned mathematical physicist, described by James Maxwell as someone with a “powerful intellect”, generally known for his work in electromagnetic theory, which went into the development of the mathematical theory of electromagnetism, developed by Maxwell in 1873, via his four Maxwell equations of electromagnetic phenomenon.

Religion
When Gauss began to near the age of 70, he become increasingly avoiding of scientific conversations with people, and instead began to spend his mornings in the Gottingen University library focusing on philosophy and religion questions, and began, according to mathematics biographer Jane Muir (1961), to become agnostic about his belief system; the following are example quotes from this period: [4]

“Without immortality, the world would be meaningless and all of creation an absurdity.”

“Tell me, how does one begin to believe?”

“There are problems to whose solution I would attach an infinitely greater importance than to those of mathematics, for example touching ethics, or our relation to god, or concerning our destiny and our future; but their solution lies wholly beyond us and completely outside the province of science.”

Gauss also, supposedly, believed, in his earlier years, that he had solved difficult mathematical theorems not by mental effort, but via the grace of god; and example of which is as follows: [2]

“I succeeded, not on account of my painful efforts, but by the grace of god. Like a sudden flash of lightening the riddle happened to be solved. I, myself, cannot say what was the conducting thread which connected what I previously knew with what made my success possible.”

Humboldt Laplace anecdote
In circa 1805, sometime after Gauss solved the Ceres tracking problem (1801), Alexander Humboldt, looking for someone to fill the position of director at the Gottingen observatory, queried Pierre Laplace about who he thought were the greatest mathematicians; the conversation went as follows: [5]

Humboldt: “Who is the greatest mathematician in Germany?

Humboldt: “But what about Gauss?”

Laplace: “Oh, Gauss is the greatest mathematician in the world!”

Quotes | By
The following are quotes by Gauss:

“Sophie Germain proved to the world that even a woman can accomplish something in the most rigorous and abstract of sciences.”