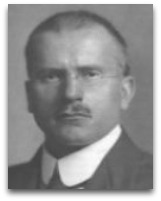 Overview
In 1928, Jung began to make modifications and additions to the 1895 thermodynamics-based psychology theories of Austrian psychiatrist Sigmund Freud, especially on the topics of "psychic energy" and of entropy in relation to the psyche, as in “psychic entropy”.

Jung later attempted to make connections between alchemy and psychology; the latter being a sort of rudimentary precursor to human chemistry. [1]

In circa 1960s, Hungarian-born psychologist Mihály Csíkszentmihályi stumbled upon a lecture of Jungs and was instantly converted into the path of becoming a psychologist, thereafter using Jung's theories on entropy to formulate parts of a flow theory of optimal experience.

Quotes | By
The following are quotes by Jung:

“The meeting of two personalities is like the contact of chemical substances; if there is any reaction, both are transformed.”

References
1. (a) Jung, Carl. (1928). “On Psychic Energy” (subsection C: Entropy), in On the Nature of the Psyche (1960). Princeton University Press.
(b) First published as “Uber de Energetik der Seel” in a volume of the same title (Zurich, 1928), which was translated by H.G. and C.F. Baynes as “On Psychical Energy” in Contributions to Analytical Psychology (London and New York, 1928).
(c) The translators’ forward to the latter volume states that this paper “was framed soon after the author had finished the Psychology of the Unconscious [i.e. Wandlungenund Symbole der Libido, pub. 1912]. It was, however, pressed aside by the greater importance of the type-problem …, and, originally entitled “The Theory of the Libido”, was taken up again only last summer.
(d) The original version was republished, under the title, in Uber Psychische Energetic und das Wesen der Traume (Zurich, 1948).
(e) Thims, Libb. (2007). Human Chemistry (Volume Two), (preview), (section: "Psychodynamics", pgs. 675-77). Morrisville, NC: LuLu.
(f) Hall, Calvin S. and Nordby, Vernon J. (1973). A Primer in Jungian Psychology. New York: Meridian Books.
2. Jung, Carl G. (1933). Modern Man in Search of Soul (pg. 49). Harvest Books.

Further reading
● Jung, Carl. (1946). The Structure and Dynamics of the Psyche. Vol. 8 of the Collected Works of C. G. Jung.
● Jung, Carl. (1944). Psychology and Alchemy, Zurich.
● Schwartz-Salant, Nathan. (1998). The Mystery of the Human Relationship: Alchemy and the Transformation of Self. Routledge.
● Corlett, John G. and Pearson, Carol S. (2003). Mapping the Organizational Psyche: A Jungian Theory of Organizational Dynamics and Change. Gainesville, Fl.: Center for Applications of Psychology, Inc.