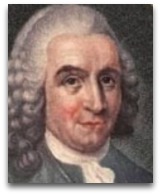 In existographies, Carl Linnaeus (1707-1778) (IQ:180|#156) [RGM:93|1,500+] (Cattell 1000:128) (CR:30), aka "Linne" (Haeckel, 1899), was a Swedish botanist, physician, and zoologist noted for his 1735 three kingdom classification of nature, for his 1735 binomial nomenclature classification (Linnaean classification) of species scheme, and for being the mentor of Swedish chemist Torbern Bergman, author of A Dissertation on Elective Attractions (1775), the biggest textbook on affinity tables and affinity chemistry, the logic of which was used by Goethe in circa 1808 to make a conceptual human affinity table (see: Goethe's affinity table), which thus initiated the science of human chemistry.

Theology
Linnaeus asserted a theological basis to his classification scheme by the statement: "there are just so many distinct species as there were distinct types created in the beginning by the infinite."

Centigrade scale
In the historical development of the thermometer, in 1758, Linnaeus claimed, its seems incorrectly, to have been the originator of the centigrade scale. [1] Linnaeus was the assistant to Swedish astronomer Anders Celsius (1701-1744) and in the years to follow Celsius’ dereaction (death), encouraged the use of Celsius' scale among thermometer manufacturers, and also reversed Celsius’ scale to make his own patented “Linnaeus thermometer”, for use in greenhouses. [2]

Bergman
Influenced by his parents, Swede Torbern Bergman (1735-1784) initially studied theology and philosophy but in secret also mathematics, physics and astronomy. Bergman's broad interest in the natural sciences also brought him in contact with Linnaeus, who became his teacher, who became convinced that Bergman had a great talent for entomology. Linnaeus's famed classification scheme was said to be the inspiration for Bergman creation of similar binomial Latin names like acidum aereum for OCO in 1773 and scores of base + acid-adjective combinations like argentum natratum (AgNO3), calx aerata (CaCO3), cuprum saltium (CuCl2), and zincum vitriolatum (ZnSO4) in 1775. [3]

Goethe
German polyintellect Johann Goethe is said to have commented, at one point, that after William Shakespeare and Benedict Spinoza he was influenced most strongly by Linnaeus, the latter particularly with respect to his early botanical studies for form change. [4] After 1809, however, with the publication of his Elective Affinities, his self-defined "best book", which he embedded a morality system based on the moral symbols invented and employed chemically by the "great Bergman", it would seem that Goethe might have come to be aware of the affinity chemistry work of Bergman via Linnaeus. This connection, however, remains to be tracked down.

Quotes | On
The following are quotes on Linnaeus:

“I know no greater man on earth than you.”

“His heart was remarkably noble, though I am well aware that he was accused of many faults. His intellect was keen and penetrating: you could see it in his eyes. But his greatest characteristic was his ability to reason methodically: whatever he said or did was methodical and systematical. In his youth he had a wonderful memory, but all too soon it let him down... His passions were strong and violent...He could lose his temper abruptly or become very irritated; those feelings would disappear as quickly as they had appeared. You could rely on the constancy of his friendship; it was almost always founded on an interest in science, and all the world knows how much he did for his pupils and how devotedly, how ardently they returned his friendship and became his champions.”

“With the exception of Shakespeare and Spinoza, I know no one among the no longer living who has influenced me more strongly!”

Quotes | By
The following are quotes by Linnaeus:

“The apes are the nearest relations of the human race.”

“No one has been a greater botanicus or zoologist. No one has written more books, more correctly, more methodically, from his own experience. No one has more completely changed a whole science and initiated a new epoch. No one has become more of a household name throughout the world.”