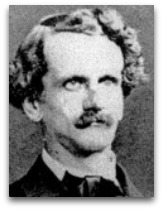 In thermodynamics, Carl Neumann (1832-1925) was a German mathematical physicist noted for his 1875 Lectures on the Mechanical Theory of Heat in which he introduction of the now-standard symbol notation

(d-hat), otherwise known as Neumann notation, or δ (Greek delta), in latter usages by others, to represent an inexact differential, i.e. one that is path dependent, such as are differentials of heat δQ and work δW. [1]

Neumann supposedly used his own methods, by passing the need for introducing the entropy function, to script his own version of thermodynamics. [2] His book on heat supposedly used methods on heat similar to German physicist Gustav Kirchhoff. [5]

Neumann seems to have developed an interested in thermodynamics via the overlap of heat and electricity. His 1873 book Explanation of Electrical Forces and Expansion gives evidence to this. [2] Neumann thought that mechanical explanations in physics were incomplete, contradictory, and overly complex. Having studied the analogies between electrodynamics and mechanics, specifically hydrodynamics, which Hermann Helmholtz, Gustav Kirchhoff, and Ludwig Boltzmann, and others had developed, Neumann convinced himself that the analogies lacked “deep foundations”. Moreover, the explanation of heat phenomena requires thermal principles and since heat is intimately related to electricity, he did not expect “merely mechanical principles” to succeed with electricity either. [2]

German physicist Georg Helm seems to have been the first to point this origin out, specifically in his 1898 History of Energetics, wherein he comments Neumann was the one that suggested that the special differential sign

(d hat Q) should be used as a way of always keeping in mind the differentials, such as heat, that do not fit the condition for an exact differential. [8]

Economic thermodynamics
Neumann, supposedly, had views on how thermodynamics applied to economy. [6] Neumann argued that all economic life could be expressed by an exchange of energy or by “the transfer of energy of physical bodies”. Neumann, according to the 1887 views of Georg Helm, considered the “energy of the self as the capital of the body”, such that the body contained an energetic component considered as a commodity. [7] The actual citation used by Helm, in the Final Section to his The Doctrine of Energy is:


The term 'eigenenergy' (of translated as self-energy) may actually mean internal energy, possibly, as used in the sense of Helm? The exact article (or book) that Helm made these economic speculations using thermodynamic theory still needs to be tracked down; but, nevertheless, the above quote does seem to indicate that Neumann's thermo-economic views predate those of Helm?