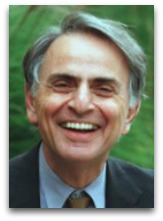 Cosmos
In 1980, Sagan, became famous for his PBS series Cosmos, co-written with his wife Ann Duryan, wherein he defines a human as “star-stuff”; used the term "cosmic perspective" for the advanced perspective; and seemed to conjecture for a universe that is god-free, though, it seems, not stated so explicitly.

Agnostic | Atheism
Sagan was a self-defined agnostic; albeit leaning towards atheism in commentary; he even is commonly cited as an atheist. The following are representative position statements:

“Those who raise questions about the god hypothesis and the soul hypothesis are by no means all atheists. An atheist is someone who is certain that god does not exist, someone who has compelling evidence against the existence of God. I know of no such compelling evidence. Because God can be relegated to remote times and places and to ultimate causes, we would have to know a great deal more about the universe than we do now to be sure that no such God exists. To be certain of the existence of God and to be certain of the nonexistence of God seem to me to be the confident extremes in a subject so riddled with doubt and uncertainty as to inspire very little confidence indeed.”

“Some people think God is an outsized, light-skinned male with a long white beard, sitting on a throne somewhere up there in the sky, busily tallying the fall of every sparrow. Others—for example Baruch Spinoza and Albert Einstein—considered God to be essentially the sum total of the physical laws which describe the universe. I do not know of any compelling evidence for anthropomorphic patriarchs controlling human destiny from some hidden celestial vantage point, but it would be madness to deny the existence of physical laws. But if by God one means the set of physical laws that govern the universe, then clearly there is such a God. This God, however, is emotionally unsatisfying. It does not make much sense to pray to the law of gravity.”

“In science, it often happens that scientists say, 'You know that's a really good argument; my position is mistaken,' and then they would actually change their minds (see: recant) and you never hear that old view from them again. They really do it. It doesn't happen as often as it should, because scientists are human and change is sometimes painful. But it happens every day. I cannot recall the last time something like that happened in politics or religion.”

“Do you understand how – assuming either of us ever did say ‘The universe can be explained without postulating God’ – this could be understood as dogmatic? I often talk about the ‘god hypothesis’ as something I’d be fully willing to accept if there were compelling evidence; unfortunately, there is nothing approaching compelling evidence. That attitude, it seems to me, is undogmatic.”

“An atheist has to know a lot more than I know. An atheist is someone who knows there is no god.”

“I am not an atheist. An atheist is someone who has compelling evidence that there is no Judeo-Christian-Islamic God. I am not that wise, but neither do I consider there to be anything approaching adequate evidence for such a god. Why are you in such a hurry to make up your mind? Why not simply wait until there is compelling evidence?”

Journalist Joel Achenbach surmises, of these quotes, that: “Does this wait-and-see attitude make Sagan an ‘agnostic’? That word seems inadequate to me. Yes, he held out the possibility of a god, but believed that possibility to be very small.” This “small possibility” would seem to put Sagan in the DN:6± range, likely more towards the negative side (e.g. DN:6-), being that Richard Dawkins, the supposed biggest “admitted” atheist presently, self-classifies as DN:6+, and has videos on the phrase “I’m an atheist, but …” (Ѻ) The following comment, likewise, is telling:

“In his adult life he was very close to being an atheist. I personally had several conversations with him about religion, belief, god, and yes I agree he was darn close. It’s really semantics at this level of distinction. He was certainly not a theist. And I suppose I can relate because I personally don’t call myself an atheist, although if you probed what I believe, it would be indistinguishable from many who do use that term.”

Sagan, here, then, would seem to be an "agnostoatheist", if there is such a term.

Family
Carl Sagan was the husband of Lynn Margulis and their son is Dorion Sagan.

Influence | Students
American mechanical engineer Bill Nye studies under Sagan, who was one of his professors, at Cornell University in 1977. In 1975, Neil Tyson, then aged 17, was exchanging letters (Ѻ) with Sagan, in aims to study under him at Cornell.

Education
In 1954, Sagan, while attending the University of Chicago, made a reading list (Ѻ)(Ѻ) that he intended to tackle, some of which include Mark Zemansky’s Heat and Thermodynamics and Edward Guggenheim’s Thermodynamics: and Advanced Treatment.

“Marvin Minsky and Carl Sagan are two men I conceded were more intelligent than I was.”

“When my husband died, because he was so famous and known for not being a believer, many people would come up to me — it still sometimes happens — and ask me if Carl changed at the end and converted to a belief in an afterlife. They also frequently ask me if I think I will see him again. Carl faced his death with unflagging courage and never sought refuge in illusions. The tragedy was that we knew we would never see each other again. I don’t ever expect to be reunited with Carl. But, the great thing is that when we were together, for nearly twenty years, we lived with a vivid appreciation of how brief and precious life is. We never trivialized the meaning of death by pretending it was anything other than a final parting. Every single moment that we were alive and we were together was miraculous-not miraculous in the sense of inexplicable or supernatural. We knew we were beneficiaries of chance. . . . That pure chance could be so generous and so kind. . . . That we could find each other, as Carl wrote so beautifully in Cosmos, you know, in the vastness of space and the immensity of time. . . . That we could be together for twenty years. That is something which sustains me and it’s much more meaningful. . . . The way he treated me and the way I treated him, the way we took care of each other and our family, while he lived. That is so much more important than the idea I will see him someday. I don’t think I’ll ever see Carl again. But I saw him. We saw each other. We found each other in the cosmos, and that was wonderful.”

“I am a collection of water, calcium, and organic molecules called Carl Sagan. You are a collection of almost identical molecules with a different collective label. But is that all? Is there nothing in here but molecules? Some people find this idea somehow demeaning to human dignity. For myself, I find it elevating that our universe permits the evolution of molecular machines as intricate and subtle as we are. But the essence of life is not so much the atoms and simple molecules that make us up as the way in which they are put together.”

“These are some of the things hydrogen atoms do, given 15 billion year of evolution.”