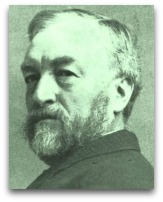 In hmolscience, Carl Snyder (1869-1946) (SN:54) was an American economist, statistician, and chemistry historian noted for his outlines of some type of atomic theory and Gibbs + Goethe based deterministic realism philosophy.

Berthelot | Goethe | Gibbs
In 1902, Snyder, in his “Fifty Years of Synthetic Chemistry”, outlined a rather rich history of the subject of synthetic chemistry, wherein he impressively connects the dots of the work of Marcellin Berthelot to Willard Gibbs and then back go Johann Goethe, in human chemistry, as follows: [1]

“Berthelot had shown that this mysterious vital force of his predecessors does not exist. The line demarking the domains of organic and mineral chemism is a figment of the mind. The selfsame powers rule in each. It was time to show another mystery the door. For these chemical forces, these "affinities of the atoms," what are they? For the force of gravity we have the balance; for electricity, the electroscope and the galvanometer; for light, the photometer. A chemometer, a measure of chemical actions, was lacking. For a science of chemical mechanics not so much as a corner-stone had been laid. This was M. Berthelot's new task.

Doctrines of energy were abroad in the world. The kinetic theory of gases had been worked out into a picture which explains the properties of gases in the bewildering flight and whirl and rebound of their smallest particles, the molecules. The mechanical theory of heat, that heat is simply the clash of the particles, had been built on the same foundations. A kinetic theory of matter was emerging. In the new view, all is motion; there is no "rest." Some experiments of M. Berthelot, made with Pean de St.-Giles, revealed a new factor in chemical action, the factor of time. This implied motion; it ought to be measurable.

These two savants studied the speed of formation of some compound ethers by the interaction of alcohol with acids. The experiments threw a new light upon the subject, for they showed that the velocity of the reaction was not merely measurable in time, but conditioned by a variety of physical factors, among others that of the quantity or mass of the substances present. The formation of the ethers proceeds more and more slowly as the process goes on, until finally all action comes to an end, even though both alcohol and acid remain in the liquid. This influence of mass, as it is called, has since been disclosed in all chemical processes, and has been developed into a wide theory of chemical equilibrium, which has thrown a new light upon the atomic world. The working out of the theory has fallen to other hands than those of M. Berthelot—in foremost line, to a distinguished American chemist, Professor Willard Gibbs; but it is well to remember to whom the beginning was due.

Meanwhile, in this play of the atoms, what dominating force presides? The old chemistry had assimilated the varying attractions between different substances to the human passions. The atoms hate and love, seek or reject, their fellows. They, too, have their "affinities." Of this antique idea we catch an echo in Goethe's well-known tale. For M. Berthelot's iconoclastic spirit the affinities were but princely phantoms like the "vital forces" themselves. The real agent here is heat. With this conception the new science of thermo-chemistry was born, and its godfather was the founder of chemical synthesis.”

Cosmic mechanism | Social mechanism
In 1907, Snyder, in his The World Machine: the First Phase, the Cosmic Mechanism, was advertising that he had two manuscripts: The Mechanism of Life and The Social Mechanism in preparation.

Dreiser
American novelist Theodore Dreiser (1871-1945), in his youth, in the learning of his deterministic realism philosophy of existence, grouped Herbert Spencer (First Principles), Ernst Haeckel, Jacques Loeb (“Mechanistic Conception of Life”), and Snyder (The World Machine), into one philosophical group (Ѻ), according to which man’s very identity as a speck of energy, a mechanism, driven by "chemic compulsions". [1]

Quotes
The following are noted and or relevant quotes:

“The ordinary run of men live among phenomena of which they care nothing and know less. They see bodies fall to the earth, they hear sounds, they kindle fires, they see the heavens roll above them, but of the causes and inner workings of the whole they are ignorant, and with their ignorance they are content.”

“The line dividing the domains of organic and mineral chemism is a figment of the mind. The self-same forces rule in each.”

“Physical science will not stop short of a reduction of the universe and all it contains to the basis of mechanics; in more concrete terms, to the working of a machine.”