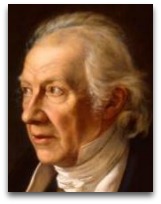 In biographies, Carl Zelter (1758-1832) was a German composer noted for being a close friend with German polymath Johann Goethe, with whom he exchanged letters with on Goethe’s Elective Affinities, and commented on the relation of this with that of Ludwig van Beethoven (see: Goethe timeline).

“As it was not yet advisable for me to go to Carlsbad, I have come to Jena, where I am trying to finish a novel [The Elective Affinities], which I sketched and began a year ago, among the Bohemian mountains. It will probably come out this year, and I am all the more anxious to hurry on with the work, as it will be a means of thoroughly re-establishing an intercourse with my friends at a distance. I hope you will think it is in my old way and manner. I have stored away much in it, hidden many things in it; may this open secret give you pleasure!”

In sum, that in Elective Affinities he not only placed numerous different hidden elements within the text, but that many of these were hidden within it and that past the transparent or non-transparent veils on may be able to see the truly intended Gestalt.

14 Sep 1812
Letter from Zelter about Goethe's view of Beethoven:

“What you say about Beethoven is certainly true. I, too, admire him with terror. His worn works seem to cause him secret horror—a perception that is dismissed all too lightly in our contemporary culture. His works seem to me like children whose father is a woman or mother is a man. The most recent work of his I have come to know (Christ on the Mount of Olives, 1811) seems to me like an impurity whose very foundation and goal are eternal death. Music critics, who seem better able to grasp and agree upon almost anything but singularity and the natural, have gushed over this composer in the most curious manner, in both praise and reproach. I know musical persons who used to find themselves alarmed, even indignant, upon hearing his works, but who are now gripped with enthusiasm for them like the partisans of Greek love. The attraction of this is not difficult to understand, and yet what can come of it you have demonstrated clearly enough in your Elective Affinities.”

“When the play is frequently repeated, it is quite a different manner. Without bellows and flames, without art and intention, there arise the most delicate elective affinities, which, in the pleasantest way, unite those seemingly isolated members into a whole; on the actors’ side, more certainly and pliability, acquired by practice, strengthened by applause, supported by an animated insight into, and a general survey of the whole; on the spectators’ side, acquaintance, custom, favor, prejudice, enthusiasm, and whatever may be the names of all the good spirits, without which, even the Iliad and Odyssey would remain to us but a lifeless framework.”

“Customers, no doubt, sometimes allow the tailor to choose a particular stuff, but they insist upon having the coat fitted to their own bodies, and are highly indignant, if it proves too tight, or too loose; they are most comfortable, when wearing the loose dressing-gowns of the day and hour, in which they can feel as easy as they like; you may perhaps remember, that they treated my Elective Affinities as though it had been the garment of Nessus.”

“Following on what went before, let me tell you in fun, that in my Wahlverwandtschaften, I took care to round off the inward, true catharsis, with as much purity and finish as possible, but I do not therefore imagine that any pretty fellow could thereby be purged from the lust of looking after the wife of another. The sixth commandment, which seemed to the Elohim-Jehovab to be so necessary, even in the wilderness, that he engraved it on granite tables with his own finger,—this it will still be necessary to uphold in our blotting-paper catechisms.”

An alternative truncated version by Ludwig Lewisohn is as follows: [2]

“We fight for the perfection of a work of art, independently and in its own nature. Those other think of its effectiveness in the world. A true artist takes no thought of that,, as little as does nature when she produces a lion or a hummingbird. As jest and superfluity let me say in addition, that I used every effort in my Elective Affinities to bring to a close the true, inner catharsis as purely and perfectly as possible. But I never imagined on that account that a handsome man could be cleansed through my story of looking lustfully at the wife of another.”

In any event, curiously, here, in the former of these two translations, we see Goethe giving way to two of his mindsets, one that he is unaware that the commandments carved onto the tablets by a "finger" and through a "a mighty hand and by a stretched out arm" (Deuteronomy 5:15), as rewrite of the Akhenoten sun god aten; secondly, and most importantly, he gives way to the notion that his entire novel may have been a physical chemistry attack on the “sixth commandment”, which in the Lutheran-Catholic numbered version of the ten commandments is “thou shalt not commit adultery”, which the version Goethe read must have incorporated the "neither shalt thou desire thy neighbors wife" (Deuteronomy 5:21) version of the commandments; whether in pure mental lust (“thou shalt not commit mental adultery”) or in actual physical lust (“thou shalt not commit actual adultery”); hence the double mental adultery that plays out in the novel.

Of relevance, to note, some have argued that the word “six” in Latin is “sex”, meaning that the etymological origin of the modern word “sex” traces to the 14th century discussions of the “sixth commandment”. [3] Prior to this, historically, this commandment was a syncretism of a number of the Egyptian religion 42 negative confessions, namely: 11 (I have not committed adultery), 13 (I have made none to weep), and 21 (I have not debauched the wife of any man), of the Anunian theology / Osiris theology era (1500BC).

The number 42 itself tracing or having roots in the 3,100BC Egyptian statehood unification (first dynasty) of the 20 nomes of Lower Egypt and 22 nomes of Upper Egypt; in the newly formed Ra-centric state religion (Ra theology), the local god of each nome was carried over into the new religion, such that These 42 different nome gods were incorporated into the first dynasty period Ra theology, such that the 42 gods (or nome gods) sat in the judgment hall (of death ), each god presiding over judgment of one particular sin.

“What man, what society dare express such sentiments? seeing that we cannot easily known anyone from his youth up, nor criticize the rise of his activity. How else does character finally prove itself, if it is not formed by the activity of the day, by reflective agencies which counteract each other? Who would venture to determine the value of contingencies, impulses, after-effects?

Who dare to estimate the influence of elective affinities?

At all events, he who would presume to estimate what man is, must take into consideration what he was, and how he became so. But such barefaced pretension are common, and we have often enough met with them; indeed they are always recurring, and they must be tolerated.”

This last issue seems to well-capture the what is called the "standard human Gibbs free energy of formation", a summation of the past energies and entropies that went into the formation or synthesis of a given human in a given state of existence.