In thermodynamics, Carnot cycle (TR:85) is a reversible four state transformation cycle of a working substance (system), typically depicted on a PV diagram, such as shown adjacent, formed by two isothermals (paths 1:2, 3:4) and two adiabatics (paths 2:3, 4:1), wherein during the isothermal expansion step (1:2) the system absorbs an amount of heat QE (expansion heat) from the hot body (source), and during the isothermal compression step (3:4) the system releases an amount of heat QC (compression heat) to the cold body (sink). [1] 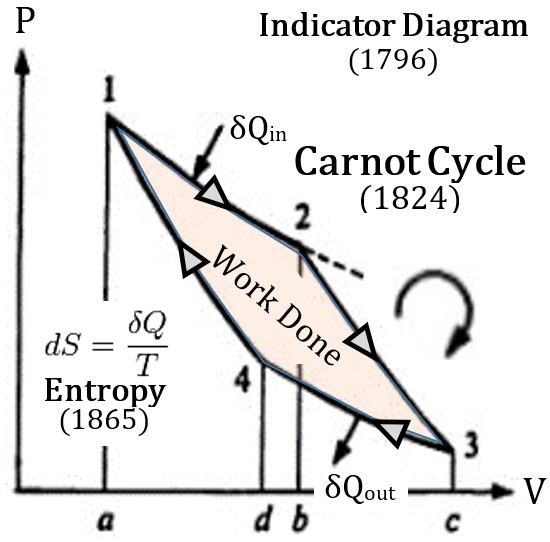 The working substance (generally water) of the Carnot cycle is typically contained within the volume confines of piston and cylinder, with the implicit assumption that the cylindrical container has nonconducting lateral walls and a nonconducting piston, such that heat can only enter or leave the working substance at the base of the cylinder, by contact with either the hot body (generally a boiler) and the cold body (generally a spray of cold water). [4]

Etymology
In 1690, French physicist Denis Papin, in his "A New Method to Obtain Very Great Motive Powers at Small Cost", introduced the two step Papin cycle description of a steam heat engine, loosely described by a step one of a person holding a fire under a water filled piston and cylinder (allowing expansion) followed by a step to of a person holding a tub of cold water under the piston and cylinder (allowing contraction).

This formed the basis of the theoretical heat engine devised by French physicist Sadi Carnot in his 1824 Reflections on the Motive Power of Fire. In this memoir, Carnot himself (according to the 1960 English translation by Eric Mendoza) seems to have used the term "series of operations" to describe the operation of the generic heat engine.

In 1834, French physicist Emile Clapeyron used the term "cycle of operations", in his graphical description of Carnot's model of the operation of the heat engine, to describe the "quantity of action" developed by changes of state, on going through in the steps 1:2:3:4, after which, when the body returns to state one, according to Clapeyron, the system is "in precisely it original state".

The actual person who coined or first used the term "Carnot cycle" needs to be tracked down.

Irreversibility
The underlying 1690 two-step Papin cycle version of the Carnot cycle, in itself, is very simple: alternately heat and cool any given body (in the universe) and confine the resulting volume change expansions and contractions so as to to produce reciprocating motion (repetitive up-and-down or back-and-forth motion), motion which can be coupled to produce useful work, via a rocker arm (Newcomen engine, 1712), crank (Pickard engine, 1780), or sun and planet gear (Watt engine, 1781). [5]

The crux of the model, which invariably accounts for the underlying difficulty of thermodynamics, is Carnot's "re-establishment of equilibrium in the caloric" assumption that the "quantity of heat", previously existing in the body in its start state, "remains unchanged" when the body returns to its original or rather final starting point state; which is described by Emile Clapeyron as a state where system is "in precisely it original state" (1834); which is described by German physicist Rudolf Clausius as an "ingenious method in which the body is allowed to undergo various changes in succession, which are so arranged that it returns at last to its original condition."

What this has come to mean, thermodynamically, is the conclusion that in the hypothetical "reversible cycle", which is what the Carnot cycle is, the internal energy change is zero:

which says that the initial and final internal energy states of the system are the same. [4] The reasoning for Clausius' use of the term "ingenious" to describe Carnot's cycle, is that internal work, which the atoms and molecules of the system do on each other (which in human terms equates to non-compensated types of work people [human molecules] do on each other in a day), in the expansion stroke, WIE is assumed to exactly cancel out or compensate for the amount or measure of internal work done in the compression stroke, WIC. Stated mathematically:

Hence, this amount of "internal molecular work", which Clausius says is "impossible to determine exactly, in most cases", cancels out or is assumed to cancel out in the reversible cycle or process. Hence, for the Carnot cycle, the first law:

and thus the external useful work, i.e. that coupled to the movement of the rocker arm, crank, or sun and planet gear, done in one reversible Carnot cycle is given by the expression:

which says that the work output of the engine equals the heat input of expansion QE, i.e. that given up by the hot body to the working body, less the heat release of compression QC, i.e. that given up by the working body to the cold body, a sum of work quantified graphically by the area enclosed in the curvilinear parallelogram on the PV diagram (1:2:3:4, above, or ABDC, below). If, however, the two types of internal work do not exactly compensate each other, which occurs in what is called the irreversible cycle or irreversible process, then we have:

and one must make recourse to the infamous Clausius inequality:

and the concept of exact differential (as compared to the inexact differential), the condition for an exact differential, and then eventually to a study of the history of differential equations, and to modern mathematical abstractions such as Caratheodory's theorem (1908), as well as to modern quantum mechanical (Bohr model, 1913), quantum electrodynamical (c.1960s), and to particle physics (c.1980-present) descriptions of quantities of heat.

Efficiency
A noted definition derived from the Carnot cycle is efficiency, symbol eta, which is defined as the ratio of the work output of the engine to the heat input:

with substitution from previous derivation given above for the work output for the Carnot cycle:


Overview
In his 1824 memoir ‘On the Motive Power of Fire’, Carnot explains how any physical body may be made to do work via expansions and contractions of its volume do to the action of heat additions or removals. This is based on what was then known as Boerhaave’s law, formulated in 1620s by Dutch chemist Herman Boerhaave.

According to Carnot, the choice of working body is arbitrary; it could be, for instance, vapor of alcohol, of mercury, of a permanent gas, or even a metallic bar alternately heated or cooled. For his cycle, Carnot used atmospheric air. In this manner, Carnot’s example working body, or working substance as he called it, was a system comprised of approximately ten chemical species: nitrogen (N2) 78%, oxygen (O2) 21%, as well as argon (Ar), neon (Ne), helium (He), methane (CH4), krypton (Kr), hydrogen (H2), nitrous oxide (N2O), and xenon (Xe), in smaller percentages.

To cause this working body of chemical species to perform useful work, we are told ‘to imagine two bodies A and B, kept each at a constant temperature, that of A being higher than that of B. These two bodies, to which we can give or from which we can remove heat without causing their temperatures to vary, exercise the functions of two unlimited reservoirs of heat.’ We shall call the first the furnace and the second the refrigerator. Motive power or work, according to Carnot, can thus be obtained by carrying a certain quantity of heat Q from body A, through the working body of chemical species, to body B.

Steps
The original description of the Carnot engine cycle process is actuated by following a series of heat movement steps, as detailed in seven stages, described by Carnot below, albeit with a few modern terminological substitutions (e.g. heat for caloric, etc.):


In this cycle, we can define two types of work being done by the working body. During the expansion phase when the piston is being pushed outward, in steps 1-3, we can define this as useful or positive work. Conversely, during the compression phase when the piston is being contracted inward, in steps 2-5, this constitutes negative or contraction work. The difference between the two constitutes the net work-output of the system.