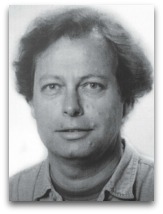 Overview
In 1992, Hakfoort, in his “masterpiece” article, as Dutch science historian Floris Cohen (2013) aptly describes it, “Science Deified: Wilhelm Ostwald’s Energeticist World-View and the History of Scientism”, penned a focused analysis on the social energetics theories of German physical chemist Wilhelm Ostwald; the abstract of which is as follows: [1]

“The life and work of the German chemist and philosopher Wilhelm Ostwald (1853–1932) is studied from the angle of scientism. In Ostwald's case scientism amounted to: (i) the construction of a unified science of nature (energetics); (ii) its use as the ‘scientific’ basis for an all-embracing philosophy or world-view (energeticism); (iii) the programme to realize this philosophy in practice, as a secular religion to replace Christianity. Energetics, a generalized thermodynamics, was proposed by Ostwald and others to replace mechanics as the fundamental theory in physical science. Its contents and fortunes are briefly discussed. Ostwald's energeticist philosophy is illustrated by his classification of the pure sciences, his theory of happiness and his science-based ethics. Ostwald cherished a metaphysics in which energy and energy transformations were fundamental to all phenomena and processes. As a result, he transferred his optimism about science and technology to energeticism: philosophical, psychological and ethical questions were regarded as capable of solution by his scientistic philosophy. The practice of Ostwald's energeticism is illustrated by two of his ‘Sunday sermons’ (on prayer and on Christmas), as well as by a public lecture on science. He considered science the modern and legitimate substitute for God and claimed that science was, or would soon be, omnipresent, eternal, almighty, omniscient and perfectly good. Ostwald's substitute religion of science suggests the question, discussed in the last section of this paper, to what extent and in what sense historians might fruitfully interpret scientism as a secular religion.”

Education
Hakfoort completed his BS in physics in 1977 at Radboud University Nijmegen, his MS in 1980 at Utrecht University, with a thesis on the scientific method in the optics of Rene Descartes and Isaac Newton, where he focused on the principles and history of physics, and in 1985 completed his PhD with a dissertation on the issues in eighteenth-century optics under H.A.M. Snelders at the Institute for the History of Natural Science. [6] In 1995, Hakfoort's PhD was published in book form as Optics in the Age of Euler: Conceptions of the Nature of Light, 1700-1795, which discusses how Leonhard Euler published a wave theory of light in 1746, the abstract of which is as follows: [3]

“According to received historiography, the fundamental issue in eighteenth-century optics was whether light could be understood as the emission of particles or as the motion of waves in a subtle medium. Moreover, the emission theory of light was supposed to have been dominant in the eighteenth century, backed by Newton's physical arguments. This picture is enriched and qualified by focusing on the origins, contents, and reception of Leonhard Euler's wave theory of light published in 1746, here studied in depth for the first time. Contrary to what has been assumed, in an important sense, the particle-wave debate only starts with Euler. In addition, Euler's wave theory was the most popular theory in Germany for thirty-five years. Finally, when the emission view of light suddenly became dominant in Germany around 1795, new chemical experiments were crucial. Reflecting on the mathematical, experimental, and metaphysical aspects of physical optics, Casper Hakfoort provides as an epilogue a general picture of early modern science.”

In late 1986, Hakfoort became a lecturer (professor from 1990) in the group of Floris Cohen at the University of Twente.

Scientism | Energetics
In the early 1990s, following his dissertation work, Hakfoort moved on to a focus centered on “scientism” in general, albeit centered on the energetics of Wilhelm Ostwald, which his associate Dutch science historian Floris Cohen (Ѻ) summarizes as follows: [4]

“As Casper showed in his article ‘The Historiography of Scientism: A Critical Review’ (1995), the notion of scientism in a variety of meanings has been around for a long time; still, Casper put it to new uses by applying it to persistent efforts over the centuries, from Hobbes and d’Holbach to Capra and Hawking in our own day, to make the latest science serve the construction of a world-view.”

Cohen, in his 2013 obituary-biography of Hakfoort, summarizes his turn to energetics history studies as follows: [5]

“That theme he finally took the philosophical significance of science in modern society, to be more precise, the tendency of scientists to their theories, valid for a limited domain of reality, to build up complete worldviews and philosophies out. Both this phenomenon, also known as scientism, as the political counterpart, technocracy, Hakfoort ran against the grain and therefore deserved further investigation. His case he found in the late nineteenth-century ideas of the great German chemist and later Nobel laureate Wilhelm Ostwald. Ostwald strove his energetic teaching, which he saw as the basis for the whole of physics and chemistry, to build a comprehensive worldview. To this end, Ostwald designed amongst much more energetic happiness formula and he propagated energetic Sunday Meetings with associated rituals and chants, replacing traditional Christian worship. Hakfoort created, there is usually a great pleasure at hearing his lectures so far to get them singing along Ostwald replacement carols lustily. His most important publication on this subject, it is now almost be called classic 'Science deified Wilhelm Ostwald Energeticist world-view and the History of Scientism', published in 1992 in Annals of Science.”

Cohen also notes that Hakfoort spent several times shorter or longer periods abroad, both in Germany, where he did research in the archives of Ostwald, as in the U.S. and England.

In 1992, Hakfoort was associated with the department of history of the University of Twente, Netherlands.

Ostwald book | Unfinished
At the start of 1998, Hakfoort was working on a new book on Ostwald, tentatively entitled Science as Paradise: Wilhelm Ostwald’s Energeticist World-View, an expansion of his 1992 article of sorts, focused on ‘what made this extraordinary man ‘tick’, in respect to his energetics replacing religion world view and its critics (supposedly Ludwig Boltzmann and Max Weber). The table of contents of the drafting book are shown below: 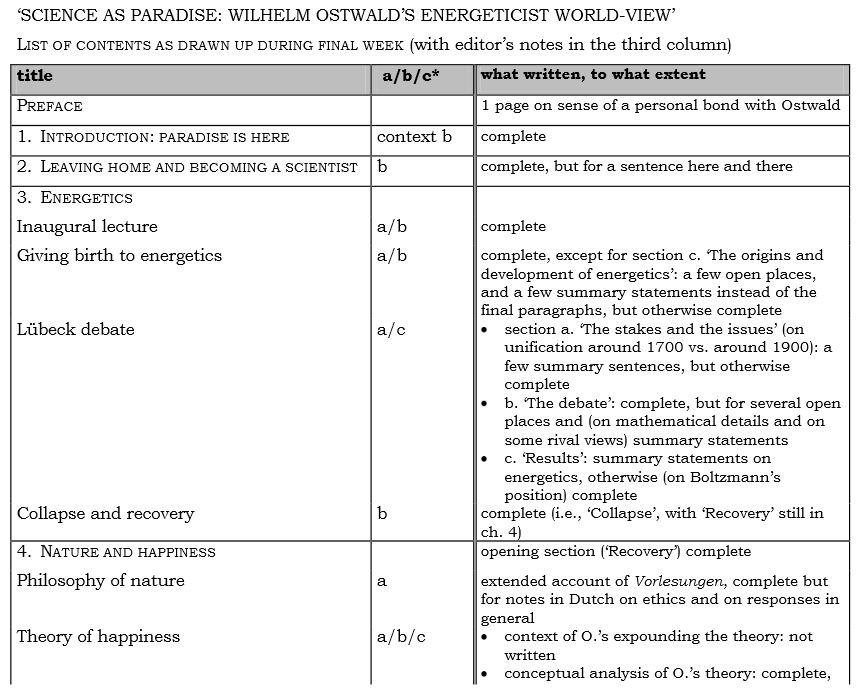 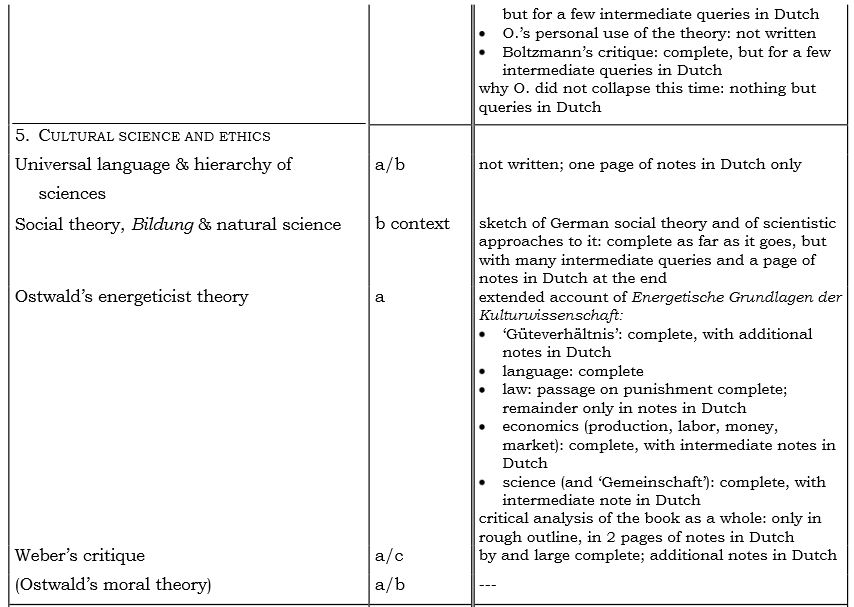 During his last days, in this state, the unfinished book was partially completed, containing 55,000 words and being 427 kb in size, the table of contents of which recounted in respect to level of completion by his associate Floris Cohen, and Hakfoort expressed openness for the possibility of someone completing his book following is passing (reaction end). Unfortunately, all of Hakfoort’s notes, computer files, photo copies of numerous books and articles, etc., that were for some time being kept stored at the department of history, at the University of Twente, were lost in a fire that destroyed the building in circa 2009. Some of chapter one is available as pdf via Floris Cohen. [4]

Reaction end
In the summer of 1998, Hakfoort fell ill and was no longer able to work; he died (dereacted) (ceased to exist) from a malignant brain tumor on 4 Mar 1999. [6]

Key | Find
The finding of the relatively unknown Hakfoort (Hmolpedia article #3,238), and his somewhat hidden gem article, occurred via reading of the citation of his work in the 2013 writings of American energetics historian Eric Zencey. [2]