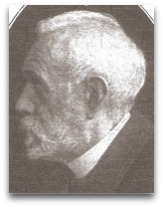 In hmolscience, Caspar Isenkrahe (1844-1921) was a German physicist noted, in religious thermodynamics, for his circa 1910s Christian apologetics publications, which tended to use entropy as an ontic opening like argument or proof for the existence of god. (Ѻ)

Overview
In 1910, Isenkrahe, in his booklet Energy, Entropy, and the Beginning and End of the Universe, presented a systematical and critical investigation of the entropic argument in order to clarify precisely on which preconditions the argument rested.

Isenkrahe actively participated in the debate over entropy and theology, particularly on the subject of the entropic proof of God's existence. [1]

Most of his articles and books tended to focus on the intersection of physics and Christianity. His commentary included discussions of William Thomson's views of heat death, among others.

In 1915, Isenkrahe, in a book, discussed, via detailed and systematic account—but would not accept—the entropic argument as a proof for god’s existence; he argued that the cosmological proof, as usually stated, rested on contradictions and erroneous reasoning, from which he concluded that it was in need of an improved, more exist formulation.

Education
From 1870 to 1911, Isenkrahe was a physics professor at Gymnasium schools in Krefeld, Bonn, and Trier.