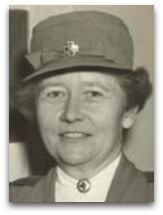 In genius studies, Catherine Cox (1890-1994) (CR:103) was an American psychologist noted for her 1926 book Early Mental Traits of 300 Geniuses, in which her and a group of psychologists at Stanford University methodologically assign IQ values (see: Cox IQ) to the top 300 geniuses, that lived in adulthood age during the years 1450 to 1850, based on the magnitude and density of their intellectual accomplishments over their lifespan. The following is Cox’s famous summary quote of the study findings that German polymath Johann Goethe is the ceiling genius of individuals who lived during these years: [1]

“One rater (M) has scored on the basis of the record of Goethe’s youth an IQ of 225. Goethe’s true IQ may in the history of mankind have been equaled in a few instances; one may well wonder whether it has ever been exceeded?”

It is of note to comment further in corroborating the findings of both Cox that Goethe was intellectual mentor to Einstein, who kept a bust of Goethe in his study along with a fifty-two volume set of Goethe's collected works in his personal library (more than any other author), was founder of human chemistry, and a key founding pioneer of human thermodynamics.

Overview
In the 1920s, American psychologist Lewis Terman, at Stanford University, creator of the 1916 Binet-Simon scale, a scale at which past the point of IQ 140 would be considered as genius range, assigned his new graduate student Cox the job of assigning IQ values to the world's “greatest” geniuses (those at or above 140), so to affix the top of his IQ scale to recognizable ceiling point or intelligence. [1]

Buzan IQs
Cox's assignment of Goethe as the lead intellect of humanity was corroborated in 1994 independent study by Englishman accelerated-learning expert Tony Buzan (see: Buzan IQ) and English literature historian Raymond Keene who formulaically-ranked the top one-hundred geniuses of all time, arriving at the result that Goethe was the number two genius, behind Shakespeare. In their method, independent to that of Cox, they scored the top 100 leading minds on an 835-point scale (GS=Genius Score): dominance in the field (100), active longevity (100), polymath (100), versatility (100), strength and energy (100), IQ (100), ongoing influence (100), prolificness and achievement of prime goal (100), universality of vision (15), outstanding originality (10), deliberate desire to create teaching avenues or academies to further the genius’ ideas (10).

Quotes | By
The following are quotes by Cox:

“IQ is thought to be a measure which expresses the relative brightness or intelligence of any given individual.”