In hmolscience, ChE + H coupling is the intellectual pairing of a chemical engineer (ChE) and a humanities (H) scholar, e.g. economist, historian, sociologist, psychologist, political scientist, or general philosopher, etc., in an intellectually-coupled manner, results in a two cultures synergy type of product, synthesis, or amalgamated fruit of some sorts.

Overview
In 1894, German mega-intellect Hermann Helmholtz (1821-1894) passed and so went with him the mental embodiment of the “last” of the great lineage, preceded by Goethe and Leibniz, of last universal geniuses, one able to firmly grasp physical and chemical principles (aka chemical thermodynamics) in one hand and the rest of human knowledge in the other:

“The matter of multiplicity of contributors needs no great explanation, for we are all used to this in the modern handbooks. I believe it is a common saying that Helmholtz was the last universal genius, and we are fast arriving at the point where even a single subject becomes too vast for one man. At any rate, whether or not any of my learned colleagues could write an entire chemical engineering handbook, I could not—hence the present form.”

The only "thing" passingly able to fill the role, void, or wake in a post Goethe-Helmholtz era, i.e. an era of knowledge over-growth, has been, seemingly, a Gibbs-trained chemical engineer plus humanities mindset pairing; or equivalent.

Adams + Bumstead | History
The following is the 1908 Henry Bumstead + Henry Adams coupling, a Gibbs' protege (a physicist by label) advising or acting as “critic, a scientific, physico-chemical proof-reader” (as Adams wanted), an historian, on his social phase based, human molecular theory explicit, physio-chemical social dynamics theory of history and rise and falls of civilizations, the draft of which, entitled: "The Rule of Phase Applied to History", being reviewed by the former, who produced as 27-page detailed critique of the technical correctness of the theory: 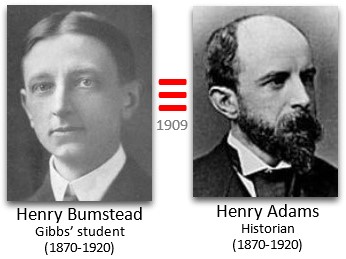 The Bumstead + Adams connection, as outlined above (right) and as discussed more in the “soft science assistance” article, evidences the difficulty of getting connection, using C.P. Snow’s two cultures terminology, between a "Shakespeare mindset" and a "Clausius mindset", namely the driving force behind the mind of Adams was immense, and that was the reason the connection was made. The unaware Edgar Buckingham, ignorant of his own insignificance in respect to Adams, in the bigger picture of things, said he would only review Adams' manuscript after it was typed up (he had been sent a hand-written version) and for two hundred dollars, the equivalent of $5,500 dollars (Ѻ) in 2016 terms. Adams, in 1909, to exemplify his intellectual fortitude, told Charles Gaskell, on the news of the passing of William Thomson, that he would have been more than willing, if he could reverse time, to walk a “few thousand-million miles” to discuss with Thomson the “thermodynamics of socialistic society”.

Flexner + Neumann | Economics
The following is the 1934 John Neumann + Abraham Flexner coupling, a chemical engineer advising an educational reformer (and co-founder of the Princeton Institute for Advanced Study) on the chemical thermodynamics based economics theories of Georges Guillaume: 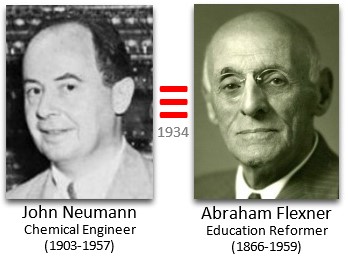 Samuelson + Wilson | Economics
The following is the 1938 Edwin Wilson + Paul Samuelson coupling, a Gibbs' protege (and a professor of physical chemistry based economics; see: Mathematical Economics) mentoring an a physics-trained economist, which resulted in Wilson telling Samuelson to use Gibbs' equation 133 to formulate an general equilibrium model of economics: 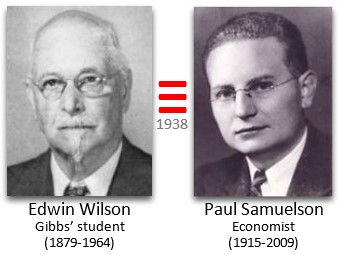 Tukey + Coleman | Sociology
The following is 1966 James Coleman + John Tukey coupling, a chemical engineer discussing an "human free energy" based attitude reaction theory with a polymath, which resulted in the publication of a synopsis of the latter's theory: 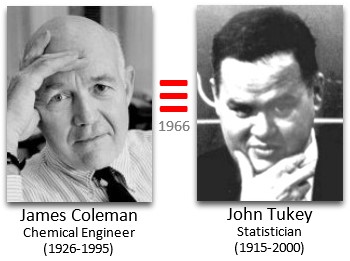 Kilburg + Donohue | Psychology
The following is the 2012 Marc Donohue + Richard Kilburg coupling, a chemical engineer working with a leadership psychologist, which resulted in their joint publication “Leadership and Organization Behavior: a Thermodynamic Inquiry”, which became the focus article of 12-author 10-article special edition of Consulting Psychological Journal: Practice and Research, focused on “The Physics of Leadership and Organizational Structure”, aka chemical thermodynamics and molecular bonding based psychology: 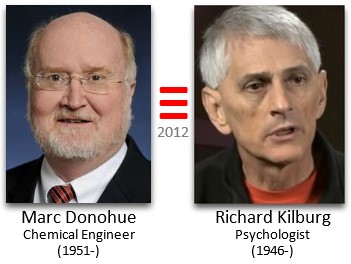 Other | Esselen + Dreier | Humanities
The following is the 1948 Gustavus Esselen + Thomas Dreier coupling, a chemist consulting an editor, which resulted in the production of the 1948 booklet We Human Chemicals, the second attempt at a general human chemistry book, following William Fairburn (1910). 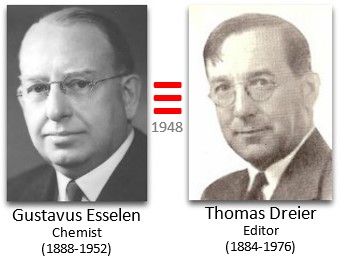 Other | Barrett + Stephan + Gerhold | Sociology
The following is Louis Barrett + Ed Stephan + George Gerhold coupling, a physicist advising a sociologist who then works with a chemist on, among other things, social chemical potential theory, therein forming a proto two cultures department (see: two cultures synergy) at Western Washington University for some years:

Other | Siman + Savoiu | Economics
The following is the 2006 to present coupling of Gheorghe Savoiu and Ion Siman, an economist paring with a physicists, the synergy of which has produced the Romanian school of physical socioeconomics and one of the world's first sociophysics and econophysics journals: 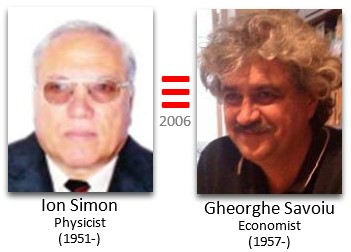 Of note, when Libb Thims visited with Simon and Savoiu, in 2013, studying the dynamics of their two cultures department, a salient comment, made by Savoiu, stood out, namely that the humanities scholar has to go to the physico-chemical sciences scholar to test ideas, for reality-checking feasibility, and in no way is this role reversed; economic theories have to answer to the laws of physics, in this case.

Other
Of note other more exotic two cultures couplings have occurred, e.g. Princeton Department of Social Physics, Harvard Pareto circle, or the Lausanne school of physical economics, but none of these involved chemical engineers directly; though Percy Bridgman, who was involved in the Princeton social physics project is an equivalent type.

ChE students | Non-joint
Of note — given the two known examples of ChE students produced humanities-like projects, namely: “Why Students Choose Chemical Engineering?” (2009), made by ChE senior Mary Guthrie, intermixed with the dialogue of economics and ChE student Jawad Mirza, and the student-produced “Thermodynamics of Life: Occupy Wall Street Edition” (2011), supervised by James Ferri, and made by chemical and biomolecular engineering students Angela Wnek (ChBE, 2013), Isaac Lavine (ChBE, 2014), Ashley Kaminski (ChBE, 2013) — when ChE-based humanities-like are made solo by ChE students, as lack of soberness and seriousness seems to be thematic, as compared to the extreme willing to burn at the state soberness of someone like Henry Adams or Lawrence Henderson.

“It is interesting to note that socio-thermodynamics is only accessible to chemical engineers and metallurgists. These are the only people who know phase diagrams and their usefulness. It cannot be expected, in our society, that sociologists will appreciate the potential of these ideas.”

Notes
Note: the “ChE + H coupling” term was first used, on 16 Apr 2016, in the Randall Schweller article; out of an early Google Books snippet read confusion that Schweller, a global political science theorist, had consulted with chemical engineering professor Sharon Glotzer on entropy at the nano-scale and the political-scale, which was not the case.