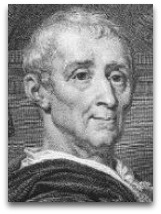 In existographies, Charles Montesquieu (1689-1755) (IQ:175|#225) (Cattell 1000:308) [RGM:164|1,500+] (SN:46) [HD:8] (CR:57) was a French political philosopher noted, in political thermodynamics, for his 1748 book The Spirit of the Laws, in which he differentiates between the behaviors and personalities of people in hot versus cold climates, arguing that the laws of government must be adapted to each peculiar region, each region being a function of the soil and climate; the logic of which, said to have been influential to Scottish-born American John Witherspoon, who in turn taught James Madison, the father of the US constitution, who is attributed as having made Newtonian government models the method of the American government system.

In 1689, John Locke, in his Second Treatise on Government (Ѻ), building on the “state of nature” (Ѻ) of Thomas Hobbes, proposed a two-part government consisting of an executive and a legislature. [8]

In 1748, Montesquieu, in his Spirit of the Laws, building on Locke, add the idea of a third branch, the courts, according to which each branch would exercise “checks and balances” on the other, ensuring that no one branch would obtain a runaway authority of power. [8]

Montesquieu, in his On the Spirit of the Laws, stated the following: [6]

“Every man whom some power is granted tried to get more and eventually misuses it.”

This posit, according to Bertrand Roehner (2007), led Montesquieu to conclude that only a balance of power between different branches of government can ensure that none of them will take precedence over the others.

Overview
Montesquieu argues that equality among people, and within the sexes in marriage, tend to increase 1) with latitude or 2) with decrease in average daily temperature. The following is one excerpt on the subject: [2]

“We have observed that [in hot climates] great heat enervates the strength and courage of men , and that in cold climates they have a certain vigor of body and mind, which renders them patient and intrepid, and qualifies them for arduous enterprises. This remark holds good, not only between different nations, but even in different parts of the same country. We ought not, then, to be astonished that the effeminacy of the people in hot climates has always rendered them slaves; and that the bravery of those in cold climates has enabled them to maintain their liberties. This is an effect which springs from a natural cause.”

To explain temperature-based behaviors, Montesquieu gives some 3,000 citations, one in particular being that iron bars tend to contract when cooled (similar Carnot in his 1824 Reflections and previous to that as Boerhaave's law (1720)), and that by extrapolation such an effect may occur in human nerve endings, thus mediating different personal behaviors in love, sex, courageousness, and passions, etc., of people in lands of different heat.

Social physics | Influence
Montesquieu's influence is difficult to underestimate. His ideas on liberty and equality, alongside those of Jean-Jacques Rousseau and Voltaire, led directly to the events of the French Revolution; whose views influenced others to follow. Montesquieu's application of science to political affairs seems, in particular, to have influenced James Madison, who would have a tremendous impact on the societal orchestration of the United States of America, as he is colloquially called "The Father of the Constitution". Madison, as John Q. Stewart points out, in regard to the historical formation of the Princeton Department of Social Physics, was a student of Scottish-born American John Witherspoon (1723-1794), a signatory of the Declaration of Independence and 6th president of Princeton University, who in turn was a noted interpreter of the political philosophy of French theorist Montesquieu.

Human thermodynamics
In modern terms, we can explain this as the effect of heat acting on the reaction to lower the activation energy, in the sense that hotter climates will tend to have higher reproduction rates (reaction rates), whereas in colder climates, entropic effects may dominate, instilling slower or lower reproduction rates. In other words, people in colder climates will be forced to do more to surmount the activation energy barrier, e.g. expend more energy on achievement and social status, before successful reproductive reaction will occur, whereas in hotter climates enthalpic effects will be favored, and reproduction may occur in the first decade of life, simply based on visual or visceral stimulation. [3]

Other
Of note, American economist Philip Parker based a larger part of his 2000 book Physioeconomics on Montesquieu’s theories, albeit delving further into the issue with ideas on hypothalamic function. [4]

Quotes | On
The following are quotes on Montesquieu:

“Open that famous new work [by Montesquieu] which reveals the Spirit of the Laws and you will learn that men depend on laws, and the laws depend on climate; that if legislators ignore its influence they give orders in vain; that nothing is more widespread and more powerful that the influence of the air; that it effects the mind, character, customs, laws, politics, religion and government of each country.”

“Newton, Bacon, Leibniz, Montesquieu, and myself are the five greatest men I can name.”

“Montesquieu held that there were certain fundamental and eternal principles similar to the laws of physics which result in relating all political and human relationships to their natural settings and causes.”

“Those who have said that a ‘blind fate’ has produced all the effects that we see in the world have said a great absurdity; for what greater absurdity is there than a blind fate that could have produced intelligent beings?”

“Laws are the necessary relations which derive from the nature of things; and in this sense, all beings have their laws: the divinity has its laws, the material world its laws . . . man has his laws. Those who have said that a blind fatality has produced all the effects that we see in the world have uttered a great absurdity; for what greater absurdity than a blind fatality which has produced intelligent beings. Therefore, there is an original reason; and laws are the relations which are found between it and different beings and the relations of these beings among themselves.”