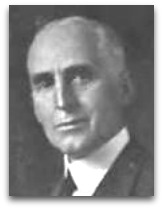 In hmolscience, Charles Beard (1874-1948) was an American historian for his 1936 "ten chemicals argument", a chemical analogy argument against causation.

Overview
In 1936, Beard, in his The Devil Theory of War: an Inquiry into the Nature of History and the Possibility of Keeping Out of War, gave the following argument: [1]

Beard's aim in arguing here, as summarized by Morris Zucker, is to fortify his rejection of the "wicked person" or impersonal "forces" theories of the cause of World War I (1914-1918), and to scorn, supposedly, the utopian forever peace theorists. [2]

Goethe
A simpler version of this query was pursued by German polyintellect Johann Goethe, who in the opening chapters of his physical chemistry based 1809 Elective Affinities, situated the following reaction scenario, each chapter representative of a step in the chemical mechanism:

“Let a chemist take [two] chemicals [Edward & Charlotte] in a test tube [estate]. He adds an third [Captain]. A precipitation follows [Edward=Captain]. Did the [third] chemical ‘cause’ the precipitation? Or was it ‘caused’ by the reaction of the other [two] to the event of addition?”

It remains to be determined where—presumably it is embedded or hidden in his novella somewhere—exactly Goethe, in his novella, discusses causation; but, nevertheless, in his 1796 anatomy lecture, section on affinity, he states that the limits or order when chemical separations and recombinations occur do so according to deterministic laws, and that to explain these reactions, he states: [3]

“Chemists speak of elective affinities, even though the forces that move mineral components [or humans] one way or another and create mineral structures are often purely external in origin.”

The answer to Beard's question, then, in short, as Goethe sees things, rephrased in modern physical science terms, is that such reactions, human or chemical, are caused by gravito-electromagnetic forces "often purely external in origin" [see also: internal force], determined by the laws of physical science, thermodynamics predominately, quantified macroscopically by free energies, and spoken about, mechanistically (microscopically), in terms of chemical affinities.

Other
Here, to note, we are also reminded, in the reverse sense, of the chemical teleology embedded investigations of Mexican-born American chemist Vicente Talanquer. [4]

“Some things seem to be deeply rooted in the very constitution of the universe.”