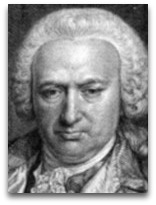 In existographies, Charles Bonnet (1720-1793) (Cattell 1000:737) (CR:18) was a French natural philosopher noted for his 1745 great chain of being diagram, tracing the so-called unbroken chain of existence from the human down to the minerals and elements, i.e. from organic to the inorganic, in one single gradation continuum, and for coining the term evolution.

Chain of being
In 1764, Bonnet gave the following statement about his chained existence model: [1]

“Between the lowest and the highest degree of spiritual and corporal perfection, there is an almost infinite number of intermediate degrees. The succession of degrees comprises the universal chain. It unites all beings, ties together all worlds, embraces all the spheres.”

Bonnet, in regards to his unbroken chain model of existence, in contrast to the unbridgeable gap model, was a student so-to-speak of the monad doctrines, a type of subatomic panbioism, of Gottfried Leibniz.

Soul theory
In 1769, Bonnet, in his Regeneration Philosophy, stated something along the lines of the following:

“If someone ever demonstrated that the soul is material, they should not be alarmed; should we not admire the power which gave the material the ability to think?”

This statement is the opening quote to Joseph Priestley’s 1777 soul treatise.

Quotes | On
The following are quotes on Bonnet:

“As compared with the evolutionary hypotheses which had already been put forward by Maupertuis, Diderot, and Robinet, these speculations of Bonnet (Philosophical Palingenesis, 1770) were obviously crude and retrogressive.”

Quotes | By
The following are quotes by Bonnet:

“Nature seems to make a great leap in passing from the vegetable to the fossil [i.e. rock]; them are no bonds, no links known to us, which unite the vegetable and the mineral kingdoms. But shall we judge of the chain of beings by our present knowledge? Because we discover some Interruptions, some gaps in It here and there, shall we conclude that these gaps are real? The gap that we find between the vegetable and the mineral will apparently someday be filled up. There was a similar gap between the animal and the vegetable; the polyp has come to fill it and to demonstrate the admirable gradation there is between all beings”