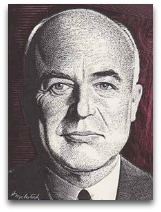 In hmolscience, Charles Pelham Curtis Jr. (1891-1959) was an American law and public affairs scholar noted for his co-authoring, with George Homans, the 1934 book An Introduction to Pareto, a summary of the two-year seminar on the Seminar on the Sociology of Pareto, conducted at Harvard University (1932-1933), by Lawrence Henderson, head of the Harvard Pareto circle. [1]

Education
Curtis was an American US Navy destroyer commander during WWI (Ѻ), during which time he began to amass an anthology of passages from nonfiction books of recent centuries, read widely, copying passages he found intriguing into notebooks by hand, thereafter writing several books on law and public affairs.