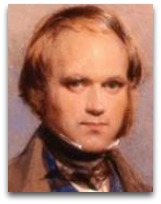 Origin of Species
In 1837, Darwin notebooks (the precursors to his famous 1859 book) were given the provisional title The Transmutation of Species, which is said to have meant to convey a type of chemical language. [6]

In 1859, Darwin published the finalized version of his draft theory along with scientific evidence in his On the Origin of Species - by Means of Natural Selection or the Preservation of Favored Races in the Struggle for Life, in which he cites three people as having been forerunner theorists to his own evolution theory: Johann Goethe (1784), Erasmus Darwin (1791), and Etienne Saint-Hilaire (1833). [1]

In 1861, in the third edition of Origin of Species, Darwin added the following concerning criticism raised about the term ‘natural selection’: [8]

“Several writers have misapprehended or objected to the term ‘natural selection’ . Some have even imagined that natural selection induces variability, whereas it implies only the preservation of such variations as occur and are beneficial to the being under its conditions of life. No one objects to agriculturists speaking of the potent effects of man's selection; and in this case the individual differences given by nature, which man for some object selects, must of necessity first occur. Others have objected that the term selection implies conscious choice in the animals which become modified; and it has even been urged that as plants have no volition, natural selection is not applicable to them!

In the literal sense of the word, no doubt, natural selection is a misnomer; but who ever objected to chemists speaking of the elective affinities of the various elements ? — and yet an acid cannot strictly be said to elect the base with which it will in preference combines.

It has been said that I speak of natural selection as an active power or deity; but who objects to an author speaking of the attraction of gravity as ruling the movements of the planets? Every one knows what is meant and is implied by such metaphorical expressions; and they are almost necessary for brevity. So again it is difficult to avoid personifying the word ‘nature’; but I mean by nature, only the aggregate action and product of many natural laws, and by laws the sequence of events as ascertained by us. With a little familiarity such superficial objections will be forgotten.”

English two cultures literature scholar Gillian Beer notes that the issue here is that the term “selection” implies or imbues nature with “conscious agency”, and that Darwin, aware of German polymath Johann Goethe’s previous usage of the term—as the title of his grand 1809 metamorphology theory of form change (chemical to plant to animal to human)—whom he cited in his original 1859 edition as being one of three forerunners of evolution theory (along with Erasmus Darwin and ) brought the science of affinity chemistry here into the discussion to deflect the attack. [10]

“Science has nothing to do with Christ, except insofar as the habit of scientific research makes a man cautious in admitting evidence. For myself, I do not believe that there ever has been any revelation. As for a future life, every man must judge for himself between conflicting vague probabilities.”

In 1871, Darwin wrote a famous letter to English botanist Joseph Hooker, wherein he attempted to address the life from non-life issue:

“[The original spark of life may have begun in] a warm little pond, with all sorts of ammonia and phosphoric salts, lights, heat, electricity, etc. present, so that a protein compound was chemically formed ready to undergo still more complex changes.”

This postulate, together with the 1953 Miller-Urey experiment which showed that sparks ignited in a chemical broth over several days could make amino acids, combined with recent fossil records indicated that bacterial existed on the earth about 3.85 billion years ago, have led to the belief that once upon a time, three or four billion years ago, lightning struck a puddle of water containing a kind of warm chemical chicken broth and triggered the formation of amino acids, the building blocks of life. This type of logic, however, is inconsistent with standard molecular evolution tables that show a continuous build up and lineage of molecular structure, a table that cannot be divided by a certain hypothetical day. In other words, the laws of chemistry don't simply stop on a particular day and give their powers over to the laws of biology. The reverse is true, the laws of chemistry and thermodynamics are what define evolution and the laws of biology are only approximations. [4]

Darwin family
In 1952, Darwin's grandson English physicist C.G. Darwin (Charles Galton Darwin) published his The Next Million Years, wherein the "Introduction" chapter of which he defined the science of "human thermodynamics" as the statistical mechanical study of conservative dynamical systems of human molecules, a science through which, in his view, would be able to "predict" the next million years of human evolution. [5] C.G. Darwin is thus classified as one of the founders of human thermodynamics.

Thermodynamics
In the years 1843 and 1865, coincidentally, the science of energetics (thermodynamics) was assembling. Bold statements deriving out of this new energy science, coming from respected physicists such as William Thomson and Rudolf Clausius, had declared as physical laws of the world that the "energy of the universe is constant" and the "entropy (or dissipation of energy) of the universe tends to a maximum". [2]

English natural philosopher Herbert Spencer is one to have made one of the first attempts to reconcile the two theories: natural selection and thermodynamics.

Final words
In 1882, in the last letter Darwin is known to have dictated and signed, he wrote: [7]

Quotes | On
The following are Darwin-related quotes:

— Anons (1860), two German colleagues of Ernst Haeckel on reading Darwin’s On the Origin of Species [12]

“Darwin is the ‘new Newton’ who has explained the origin of organisms strictly via mechanical causes.”

“Avoid stating how far, I believe, in materialism, say only that emotions, instincts, degrees of talent, which are hereditary re so because brain of child resembles parent stock.”

— Charles Darwin (1827), reflection on his friend atheist radical materialist Walter Browne (1805-1885) (Ѻ) having his materialist perspective paper on life and mind ‘expunged’ from the minutes of the Plinian Society meeting [15]

“Origin of man now proved. Metaphysics must flourish. He who understands the baboon would do more towards metaphysics than Locke.”

“The monkeys understand the affinities of man better than the boasted philosopher himself.”

“Love of the ‘deity effect’ of organization, oh you materialist! Why is thought being a secretion of brain, more wonderful than gravity a property of matter? It is our arrogance, our admiration of ourselves.”

“We can allow satellites, planets, suns, universe, nay whole systems of universes, to be governed by laws, BUT the smallest insect, we wish to be created at once by special act.”

“I have called this principle, by which each slight variation, if useful, is preserved, by the term of natural selection.”

“Man is descended from a hairy, tailed quadruped, probably arboreal in its habits.”

“A moral being is one who is capable of reflecting on his past actions and their motives - of approving of some and disapproving of others.”

“You have made a convert of an opponent in one sense [of your Hereditary Genius], for I have always maintained that, excepting fools, men did not differ much in intellect, only in zeal and hard work.”

“My theology is a simple muddle. I cannot look at the universe as the result of ‘blind chance’, yet I can see NO evidence of a beneficent design, or indeed or design of any kind.”

“Man is descended from a hairy, tailed quadruped, probably arboreal in its habits, and an inhabitant of the Old World. This creature, if its whole structure had been examined by a naturalist, would have been classed amongst the Quadrumana, as surely as the still more ancient progenitor of the Old and New World monkeys. The Quadrumana and all the higher mammals are probably derived from an ancient marsupial animal, and this through a long line of diversified forms, from some amphibian-like creature, and this again from some fish-like animal.”

“I have steadily endeavored to keep my mind free (see: free thinker), so as to give up any hypothesis, however much beloved (and I cannot resist forming one on every subject), as soon as facts are shown to be opposed to it.”

“To kill an error is as good a service as, and sometimes even better than, the establishing of a new truth or fact.”

“My judgment often fluctuates. In my most extreme fluctuations, I have never been an ‘atheist’ in the sense of denying the existence of a god. I think that generally – and more and more as I grow older, but not always – that ‘agnostic’ would be the most correct description of my state of mind.”

“It seems to me (rightly or wrongly) that direct arguments against Christianity and theism hardly have any effect on the public; and that freedom of thought will be best promoted by that gradual enlightening of human understanding which follows the progress of science. I have therefore always avoided writing about religion and have confined myself to science.”