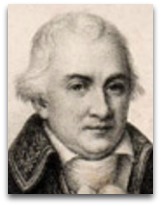 In existographies, Charles Dupuis (1742-1809) (IQ:#|#) (RMS:22) (CR:14) was French savant, a rhetoric professor, lawyer, mathematician, theologian, telegraph inventor, astronomer, and religio-mythologist, noted for his multi-volume 1794 Universal Religion: Origin of All Cults, oft-cited, along with the parallel works of Constantin Volney (1791), as one of the first Christ myth theory works.

Overview
In 1777, Dupuis, in the Journal of Savants, began publishing fragments of his common origin of all religions theory.

In 1781, Dupuis collected these scattered articles and fragments into one volume, which he published in Lalande’s Astronomy journal, entitled “Memoirs on the Origin of the Constellations and on the Explanation of the Fable by Astronomy”.

In 1794, Dupuis published volume one, of a dozen volumes in total, of his Universal Religion: Origin of All Cults, wherein he asserted that []

In 1806, Dupuis, in his Explanatory Memorandum of the Zodiac, and Mythological Time (Mémoire explicatif du Zodiaque, chronologique et mythologique) he maintains a common origin for the astronomical and religious opinions of the Greeks, Egyptians, Chinese, Persians, and Arabians.

Dupuis, in short, supposedly, argued that there was no human involved in the New Testament account which he saw as an intentional extended allegory of solar myths. [1]

Priestley
In 1797, Joseph Priestley, began attacking the Christ myth theory work of Constantin Volney (1791), who cites Dupuis, focusing on the perceived contentious assertions, by Volney, that: god of Moses was Egyptian, the linking of Christ with Bacchus and Krishna, and Volney’s claim that the world was at least 17,000 years old, 'which entirely overturns the Mosaic account of the origin of the human race'. [4]

In 1799, after reading the work of Dupuis, Priestly resumed his attack with focus on the earlier suppositions of Dupuis. [4]

Quotes | On
The following are quotes on Dupuis:

“With Dupuis rational erudition inquires into the common origin of the various religious traditions.”

“We think ourselves possessed, or, at least, we boast that we are so, of liberty of conscience on all subjects. Yet, how far are we from these exalted privileges in fact! There exists, I believe, throughout the whole Christian world, a law which makes it blasphemy to deny our doubt the divine inspiration of all the books of the Old and New Testaments, from Genesis to Revelation. Who would run the risk of translating Dupuis?”

“The French astronomer Dupuis in his great work Origin of all Cults: the Universal Religion of 1795 is the first and primary modem mythographer to analyze the ancient religions as pointing to a universal solar religion. Dupuis compared the distinctive elements of Christianity and those of previous religions. The summary of his study is translated in Appendix 3.”

“The second treatise, entirely devoted to the examination of the religious system of the Christians, is also divided into three parts. The first contains the explanation of the sacred fable of the introduction of evil into the world by the famous Serpent of the Hesperides, which seduced Eve, and which necessitated the arrival of a Repairer, who could regenerate Nature. Is found in the second chapter of the Hebrew Cosmogony, known as the Genesis. The second deals with Repairer, of his birth, of his death, and of his resurrection; it presents us with all the features which are common to it with: Mithra, Adonis, Horus, Atys, Osiris, etc. And finally, which prove up to the dawn of time, that this designated Repairer, named the Christ by the Christians, is only the sun, or the divinity endured by all peoples, under so many different forms and names. The third part, much more abstract than the first two, contains an explanation of the famous Triad of the Christians, or the triple unity, known under the names of Father, Son, and Holy Spirit.”

“It would appear almost an act of folly, in pretending to uproot that ancient Upas-tree of religious superstition, under the poisonous shade of which mankind has been for ages accustomed to repose, and the roots of which are so widespread and profound.”

Further reading
● Dupuis, Charles. (1797). Abridgment of Origin of all Cults (Abrégé de l'origine de tous les cultes). Publisher.
● Dupuis, Charles. (1857). Was Christ a Person or the Sun? An Argument from Dupuis, to Show that Christianity Had its Origin in Sun Worship. Holyaoke and Co.