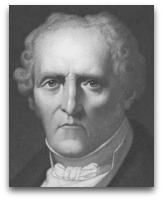 In hmolscience, Charles Fourier (1772-1837) (SN:29) was a French philosopher notable for his 1808 The Social Destiny of Man: the Theory of the Four Movements, wherein he seems to outline a Charles Montesquieu + Rene Descartes themed theory of the passions and work.

Overview
In 1799, Fourier introduced his four movements theory, called by him the "theory of the passions", later eponymized as "Fourierism", a theory that he elaborated on over the course of about thirty years, in six volumes. The gist of Fourier’s theory of the passions, according to American anarchy social theorist Peter Wilson, is as follows: [6]

Here we see Fourier's theory as a type of social gravitation theory focused on the nature and regulation of the passions. On this logic, Fourier sought to construct a model for the working arrangement of society according to his theory of the passions. The gist of his passion based social system, according to Wilson, is as follows: [6]

Here, in respect to focus on "liberated passions" throughout society, we may compare Sigmund Freud's alternative id, ego, superego theory, and its focus on how the passions get repressed, owing to subconscious actions, lying dormant often for many years, many times erupting in various conditions of psychoses.

In 1808, Fourier published his first volume entitled Theory of the Four Movements and the General Destinies, according to which he divides all movement in the universe into four types: social, animal, organic (light and matter), and material (planets), the latter of which he credits Isaac Newton and Gottfried Leibniz as having solved, the former two of which he attempts to solve by devoting effort to explain the forces of the passions acting on the bodies.

Fourier, In the opening pages of his 1808 work, cites Charles Montesquieu and Rene Descartes.

Fourier intended to write eight memoirs to elaborate on his conception, the 1808 anonymously-published Theory of the Four Movements and the General Destinies, in which he attempts to explain the human passions in terms of a semi-panbioism admixture of soul, spirit, and materialism, according to which the universe is one organic whole, albeit situated with God at the helm, according to certain layered arguments, with movement divided into human, animal, and mineral types. The gist his argument of which seems to be truncated in a footnote. [1] Fourier would seem to be aptly characterized as an earlier version of Pierre Teilhard, albeit less Bible and more novel synthesis on his own part.

Fourier was one of the earliest persons to be cited as a “social Newton” and someone who used the rare phrase “laws of social movement”, a terminology common to thinkers including: Auguste Comte, Karl Marx, and Morris Zucker, each who, in their own way, envisioned the laws of social movement as “natural laws like the law of gravity”. [2]

In 1874, Moritz Kaufmann, in his Socialism: its Nature, its Dangers, and its Remedies Considered, described Fourier as follows: [3]

“In order to judge of his system it is necessary to note one or two salient points in his conception of the constitution of man and the universe. Happiness he acknowledges is ‘our being's end and aim’; and the only true science which leads to its attainment is sociology. As the doctrine of the material movements in the universe has been fixed by Newton's discoveries, so too the laws which regulate the movements in the social world must first be ascertained before we can hope to render mankind happy. To become such a social Newton was undoubtedly Fourier's ambition, and this is the fundamental law of his social Principia.”

A leading expositor of Fourier's theories in America was Albert Brisbane.

Passions
Fourier seems to devote a significant amount of thought to the passions. Fourier believed that there were twelve common passions. Dutch utopian socialism theorist and feminist Saskia Poldervaart (1945-2011) summarized Fourier’s model of the passions as follows: [7]

“Fourier’s theory posited that suppression of the passions was immediately harmful to the individual and in the long run destructive for society. He distinguished among twelve basic passions, each of which had to be satisfied (one person attaching more importance to certain passions than another, depending on their personalities). These were divided into three categories:

(cabalist passion, for intrigue and rivalry; butterfly passion, for variety and contrasts; composition passion, for a mixture of physical and spiritual pleasure)

With this final category of passions, Fourier explicitly acknowledged the role of conflict and rivalry, recognizing that people have a need to be continuously challenged.”

These twelve passions, according to Fourier, resulted in 810 types of character, according to which the ideal phalanx (community) would have exactly 1620 people, and that one day there would be six million of these, loosely ruled by a world "omniarch" or congress of phalanxes.

Newton
In 1986, Jonathan Beecher, in his Charles Fourier: the Visionary and his World, questions the precise nature of Fourier’s borrowings from Newton, and stresses that Fourier consciously used Newton as a model. [9]

Goethe
Interesting, the development of Fourier's theory, seems to parallel German polyintellect Johann Goethe's chemical theory of the passions (chemical passion theory or human chemical theory) in some respect, both Fourier and Goethe theorizing about affinities and passions, over the course of the same decade: Goethe arrived at theory 1796 (published first account in 1809), Fourier arrived at theory in 1799 (published first account in 1808). In 1799, to exemplify, the year Fourier arrived at his theory, Goethe commented the following to German author Friedrich Schiller, in objection to the non-realistic work of work of French author Prosper Crebillon (1674-1762):

“The passions [are not] like playing cards, that one can shuffle, play, reshuffle, and play again, without their changing at all. [In describing the passions] there [must be a] trace of the delicate, chemical affinity, through which they attract and repel each other, reunite, neutralize [each other], separate again and recover.”

Fourier, however, in his celestial theory of the passions (celestial passion theory), did treat the passions like playing cards. Visitors to his conceptualized phalanx community could consult the card-index of personality types, supposedly based on the passional type or character derivative of each person, for suitable partners for casual sex.

Implementations
Fourier’s social theories, similar to Karl Marx, resulted in a number of short-lived implementations; in the case of Marx communism and socialism, in the case of Fourier, the founding of a number of communities in America, including: Utopia, Ohio, La Reunion near present-day Dallas, Texas; the North American Phalanx in Red Bank, New Jersey (lasted for 12 years); Brook Farm in West Roxbury, Massachusetts; the Community Place and Sodus Bay Phalanx in New York State, and several other communities in the United States, most lasting for only a year.

Quotes | On
The following are quotes on Fourier:

“Fourier held that association is due an ever-present force which draws men together like the law of gravity in the physical world. And again in his ‘theory of universal unity’, he held that the earth will pass through life cycles similar to the life cycles of the human individual. Its present infancy will be succeeded by a millennium of seventy thousand years, due to the perfect and unimpeded operation of the ‘power of attraction’. An age of decline will follow this, while the fourth and last stage will be a brief era of dotage.”

Quotes | By
The following are note quotes:

“Attractions are proportional to destines.”