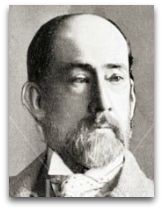 In hmolscience, Charles Gaskell (1842-1919) (CR:23) was an English author, lawyer, and politician, a member of parliament from 1885-1892, noted for being one of the closest intellectual friends of American historian Henry Adams.

Overview
On 27 Apr 1863, Gaskell met Henry Adams, at Cambridge, after which the two were among each other’s “closest friends”. [2]

In 1866, amid his fallout with his older brother Charles Adams, Jr., Henry Adams switched to writing to Gaskell, instead of his older brother, as he formerly had done, as his new main intellectual correspondent. [7]

“Everything in this universe has its regular waves and tides. Electricity, sound, the wind, and I believe every part of organic nature will be brought someday within this law. The laws which govern animated beings will be ultimately found to be at bottom the same with those which rule inanimate nature, and as I entertain a profound conviction of the littleness of our kind, and of the curious enormity of creation, I am quite ready to receive with pleasure any basis for a systematic conception of it all. I look for regular tides in the affairs of man, and, of course, in our own affairs. In ever progression, somehow or other, the nations move by the same process which has never been explained but is evident in the oceans and the air. On this theory I should expect at about this time, a turn which would carry us backward.”

“Altogether, we go on with placidity unequalled, and the only question is what we live for. Nothing seems to come of it?”

“Gentle mathematicians and physicists still cling to their laws of thermodynamics, and are almost epileptic in their convulsive assurances that they have reached a generalization which will hold good. Perhaps it will. Who cares?”

“On the physico-chemical law of development and dynamics, our society has reached what is called the critical point where it is near a new phase or equilibrium.”

“The solution of mind is certainly in the magnet.”

“I have been studying science for ten years past, with keen interest, noting down my phrases of mind each year; and every new scientific method I try, shortens my view of the future. The last—thermodynamics—fetches me out on sea-level within ten years. I’m sorry Lord Kelvin is dead. I would travel a few thousand-million miles to discuss with him the thermodynamics of socialistic society. His law is awful in its rigidity and intensity of result.”