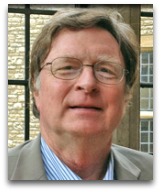 In existographies, Charles Hall (c.1943-) (CR:21) is an American systems ecologist noted for his 1986 to present attempts to derive a semblance of a thermodynamics-based ecological economics theory, which he refers to as "biophysical economics", conceptualized as being related to ecological economics, albeit without recourse to monetary assignment, framed around an admixture of the Odum school, predominately, and the Roegen-Daly school, in some respects.

Overview
In 1986, Hall co-authored Energy and Resource Quality: the Ecology of the Economic Process, with Cutler Cleveland and Robert Kaufmann, wherein, via citation (Ѻ) to David Pimentel, Herman Daly, and Robert Costanza, they discuss “energy subsidy”, i.e. a measure of how much energy an organism or economy (the analogue of an ecosystem) can capture from outside its borders, and “energetic return on investment”, i.e. computes the energy returned to an organism as a result of some expenditure, e.g., migration to better food sources; among other seeming verbal thermodynamics based arguments; the following are example quotes:

“Some biologists view the process of Darwinian selection as a law of energy, the ‘fourth law of thermodynamics’. This ‘law’ states that life is made up of unlikely, and hence nonrandom, combinations of molecules that superficially appear to be an exception to the second law of thermodynamics.”

“The laws of thermodynamics and the law of conservation of mass form the basis of an energy perspective for economic production. Recall that the first law limits our supply of matter and energy, and hence the goods and services derived from them, because matter and energy can neither be created nor destroyed, only changed in form.”

In 2009, Hall, in his “What is the Minimum EROI that a Sustainable Society Must Have?”, co-authored with Stephen Balogh and David Murphy, stated the following: [6]

“To chemists Frederick Soddy and Wilhelm Ostwald, anthropologist Leslie White, anthropologist Joseph Tainter (Ѻ), historian John Perlin (Ѻ), systems ecologist Howard Odum, sociologist Frederick Cottrell, economist Nicholas Georgescu-Roegen, energy scientist Vaclav Smil and a number of others in these and other disciplines, human history, including contemporary events, is essentially about exploiting energy and the technologies to do so.”

In 2011, Hall, in his Energy and the Wealth of Nations: Understanding Biophysical Economics, co-authored with Kent Klitgaard, attempted to usurp the neo-classical or Walrasian model of economics, diagramed by them below left, which they say “violates a number of laws and is inconsistent with actual human behavior”, with the so-called Odum-Hall model of economics, shown below right:

Hall and Klitgaard describe the left diagram as follows:

“The neoclassical view of how economies work, is that households sell or rent land, natural resources, labor, and capital to firms in exchange for rent, wages, and profit, e.g. factor payments. Firms combine the factors of production and produce goods and services in return for consumption expenditures, investment, government expenditures, and net exports. This view represents, essentially, a perpetual motion machine.”

Hall and Klitgaard describe the right diagram as follows:

“As the Neo-classical / Walras model does not include ‘boundaries’, the left figure should be reconstructed to one that include necessary resources and generation of wastages, as shown by the right figure.”

This so-called Odum-Hall model, which is based earlier energy flow diagrams of Howard T Odum, while showing a loosely theoretical “boundary”, is no boundary in the sense of thermodynamics.

In 2016, Hall, during the BPE 2016 conference, interacted with Libb Thims, might have passingly explained that his “system and boundary” model had problems, during the course of which Hall asked Thims if he would be willing to review his “thermodynamics” section, which amounts to the above diagrams, for the upcoming second edition of their book. This review never occurred, as it would require a complete overhaul of their entire model. [8]

In 2018, Hall and Klitgaard published a second edition of the Energy and the Wealth of Nations, this edition, like the previous, featuring an oil tanker on the cover, upgrade their boundary comparison models as follows: [7]

At a minimum, we see one economic "system", with a clearly defined "boundary", rather than what looks like a triple system in the previous diagram, or three boxes attempting to defined the solar system, ecosystem, and economic system inside the ecosystem, with "households" and "firms" exchanging things inside of the latter system.

Hall and Klitgaard, in this edition, also give the following so-called “Daly model”, as introduced by Herman Daly: [7] 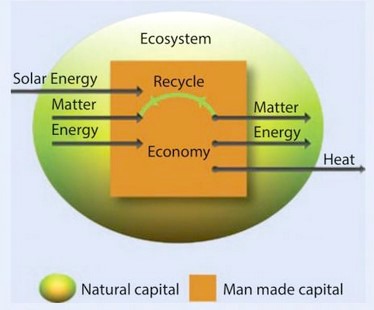 about which they say:

“This figure is a depiction of the basic ‘ecological economics model’ developed by Herman Daly. It shows that the economy is embedded within in the ecosystem, and also shows the transformation of low-entropy solar energy into high-entropy heat.”

Here, we see a confused mess as to what exactly "entropy" is, as defined by Clausius (1865), and how it related to the definition of ecosystems and economic systems; most of the error here, in large part, tracing to Nicholas Roegen’s 1971 error-filled “material entropy” model; some error comes from the mind of Daly as well.

The first criticism of neoclassical economics in respect to thermodynamics. Contemporary economics and its fundamental household-firm market model (figure above left), pays only minimal attention to the first law of thermodynamics, and none at all to the second. In fact, the second law is completely incompatible with the conceptual model known as the circular flow. In the circular flow diagram, there is never any value lost to waste or entropy. This is a serious conceptual flaw and an obstacle to designing economic policies that can meet the challenges of pollution, resource scarcity, and depletion, and unemployment successfully. In effect, the two laws say: nothing happens in the world without energy conversion and entropy production. The consequences are firstly that every process of industrial and biotic production requires the input of energy, and secondly, because of the unavoidable ‘entropy production’, the valuable part of energy, called ‘exergy’ (or free energy) is transformed into useless heat at the temperature of the environment, called ‘anergy’, an usually matter is dispersed too.”

“The human economy uses fossil and other fuels to support and empower labor and to produce and utilize capital. Energy, capital, and labor are then combined to upgrade natural resources to useful goods and services. Therefore, economic production can be viewed as the process of upgrading matter into highly ‘ordered’, i.e. thermodynamically improbable, structures, both physical structures and information. Where the economist speaks of ‘adding value’ at successive stages of production, one may also speak of ‘adding order’ to matter through the use of free energy (exergy). The perspective of examining economics in the ‘hard sphere’ of physical production, where energy and material stocks and flows are important, is called ‘biophysical economics’. It must complement the social sphere perspective.”

These two quotes, combined, represent a confused mass of conceptual misunderstanding of how chemical thermodynamics actually applies to social systems firstly, and to economics, secondly. [8] These were the types of "vents" that Julian Simon repeated made against the Roegen-Daly school, in his battles with various economics, from 1981 to 1991, when he famously quipped that entropy and the second law is irrelevant to economics:

“With respect to [the Roegen-Daly view of] energy, there is no practical ‘boundary’ surrounding any [economic] unit of interest to us. And without such a boundary, the notion of entropy in the large is entirely irrelevant to us.”

Here, what he meant was that the Odum-Roegen-Daly interpretation of how economic and energy, as defined by thermodynamics, applies to ecologies and economies; hence, restated, the "Roegen-Daly view of entropy is entirely irrelevant to us", is what Simon was saying. We clarify this here, because the "entirely irrelevant" part of Simon's quote has been more than frequently taken out of context, to the effect that he denied the second law as being applicable to societies and economies; his point was that this has never been explained properly, and that the explanations that have been given are incorrect.
Hall and Klitgaard also, of note, give the following colorful Odum energy flow diagram, which looks nice, but hardly explains anything, as per thermodynamics goes, in other words, it is but a food chain diagram, extrapolated to the sphere of economic production: 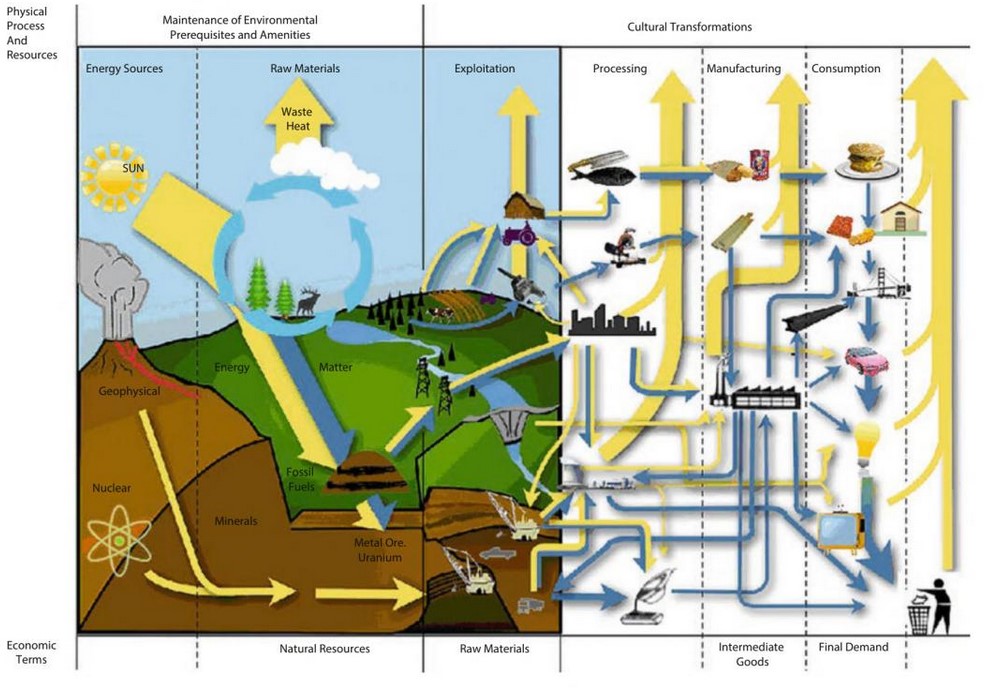 Wealth of Nations | Energy
In 2011, Hall, together with economist Kent Klitgaard, published their in his Energy and the Wealth of Nations: Understanding the Biophysical Economy, wherein they open to the erroneous assertion (pg. vii) that the following four "wealth of nation" themed books (book #s: 1-4), which are "on their shelves", as they say, don't use the following three terms: "energy", "oil", or "natural resources":


A partial Beg analysis of each book is shown in the above table. The following are two obvious examples, contrary to their fallacious assertion:

“The energy represented by a barrel of oil was especially difficult to pin down.”

This is just poor scholarship, whatever the case; particularly. Clearly, these books just sit on their shelves, unread.

In any event, Hall and Klitgaard attempt to outline, thermodynamically, how the first law and second law, should be integrated into economic policy, albeit in what might be called the Roegen-Daly school of thought on entropy, i.e. the view of Nicholas Georgescu and his student Herman Daly, namely the very tenable view that entropy, in economic terms, equates to “value lost to waste”, and that this explains pollution, resource scarcity, unemployment, and depletion. Hall and KIltgaard summarize that the two laws in biophysical economics equate to the translation that, in their own words: (1) energy conservation implies that every process of industrial and biotic production requires the input of energy, and (2) entropy production implies that because of the unavoidable entropy production the valuable part of energy (called exergy) is transformed into useless heat at the temperature of the environment (called anergy), and usually matter is dispersed too. [1]

Influences
Hall was influenced greatly by Howard T. Odum, his PhD teacher in systems ecology, Frederick Soddy, Wilhelm Ostwald, Leslie White, Fred Cottrell, Joseph Tainter, Nicholas Roegen, John Perlin, Vaclav Smil, and Robert Costanza, another Odum student. [1]
Influenced
A noted student of Hall's was Cutler Cleveland, who at Cornell University, was turned on by energy models being introduced by Hall, and went from being a failing student to a star student; Hall refers to Cleveland as his one of his best students.

Education
Hall completed BS in biology in 1965 in Colgate University, Hamilton, New York, his MS in zoology, in 1966 at Pennsylvania State University, and PhD in 1970 in systems ecology under Howard T. Odum at the University of North Carolina at Chapel Hill. In 1986, Hall promoted a fourth law of thermodynamics (see: laws of thermodynamics), likely a variant of the Odum's.

Quotes | By
The following are quotes by Hall:

“Neoclassical economics is inconsistent with the laws of thermodynamics.”

“Real economies are subject to the forces and laws of nature, including thermodynamics, the conservation of matter, and a suite of environmental requirements. Neo-classical economics does not recognize or reflect this fact.”

“The term thermodynamics was [not] coined by James Joule in 1849 to designate the science of the relations between heat and power.”

— Charles Hall (2011), Energy and the Wealth of Nations (coauthor: Kent Klitgaard) (pg. 226); citation of the incorrect Perrot (Ѻ) etymology, derived from Wikipedia edits originally added per unware error-based Perrot citation in 2005 by Libb Thims, albeit amended to Thomson 1854 etymology in Jul 2010 (Ѻ), which became its own subsection, by other Wikipedians, via citation to external Hmolpedia etymology article, shortly thereafter; after which, when Thims left Wikipedia, the etymology fell into disarray.