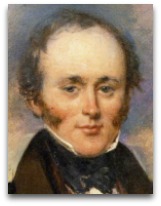 Darwin
In 1831, Charles Darwin, aged 22, was given a copy of volume one of Lyell’s Principles of Geology, by HMS Beagle captain Robert FitzRoy, which he read during their famous voyage around south America, and was mailed the other two volumes during voyage. [1]

“It is hardly possible for me even to recall to the reader, who may not be a practical geologist, the facts leading the mind feebly to comprehend the lapse of time. He who can read Sir Charles Lyell's grand work on the Principles of Geology, which the future historian will recognize as having produced a revolution in natural science, yet does not admit how incomprehensibly vast have been the past periods of time, may at once close this volume. Not that it suffices to study the Principles of Geology, or to read special treatises by different observers on separate formations, and to mark how each author attempts to give an inadequate idea of the duration of each formation or even each stratum. A man must for years examine for himself great piles of superimposed strata, and watch the sea at work grinding down old rocks and making fresh sediment, before he can hope to comprehend anything of the lapse of time, the monuments of which we see around us.”

“After my return to England [2 Oct 1838] it appeared to me that by following the example of Lyell in Geology, and by collecting all facts which bore in any way on the variation of animals and plants under domestication and nature, some light might perhaps be thrown on the whole subject.... I worked on true Baconian principles, and without any theory collected facts on a wholesale scale, more especially with respect to domesticated productions, by printed enquiries, by conversation with skillful breeders and gardeners, and by extensive reading.... I soon perceived that selection was the keystone of man's success in making useful races of animals and plants. But how selection could be applied to organisms living in a state of nature remained for some time a mystery to me. In Oct 1838, that is, fifteen months after I had begun my systematic enquiry, I happened to read for amusement Malthus on Population, and being well prepared to appreciate the struggle for existence which everywhere goes on ... it at once struck me that under these circumstances favorable variations would tend to be preserved, and unfavorable ones to be destroyed. The result of this would be the formation of new species. Here, then, I had at last got a theory by which to work.”

“It is to Charles Lyell that geology owes its thanks for its establishment upon its present sound and philosophical basis. Not until his publication, in 1830, of his Principles of Geology, was geology worth in any sense of being called a science.”

“A discovery which seems to contradict the general tenor of previous investigations is naturally received with much hesitation.”

“Hitherto, no rival hypothesis has been proposed as a substitute for the doctrine of transmutation; for ‘independent creation’, as it is often termed, or the direct intervention of the ‘supreme cause’, must simply be considered as an avowal that we deem the question to lie beyond the domain of science.”