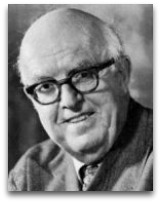 In existographies, Charles Percy Show (1905-1980) [CR:58], aka “C.P. Snow”, was an English physicist, noted for his controversial 1959 Rede Lecture “The Two Cultures” in which he commented to the effect that culture is divided between those who have an understanding of the second law and those who have read a work of Shakespeare, and that each culture is abysmally ignorant of the intellectual details of the other culture, and moreover their is a "divide" between the two cultures (see: two cultures divide; two cultures namesakes; two cultures calls). [1] The eponym "Snowed" (Scott, 1985) refers to one culture attending a meeting, class, or conference of another culture and being completely "lost" as to what is being said.

The two cultures
On 7 May 1959, Snow, in his talk “The Two Cultures”, a Rede Lecture given at Cambridge, presented a thesis according to which science and the humanities, which represented "the intellectual life of the whole of western society", had become split into "two cultures" and that this division was a major handicap to both in solving the world's problems; the following is the most-cited quote from the lecture: [2]

“A good many times I have been present at gatherings of people who, by the standards of the traditional culture, are thought highly educated and who have with considerable gusto been expressing their incredulity at the illiteracy of scientists. Once or twice, I have been provoked and have asked the company how many of them could describe the second law of thermodynamics. The response was cold: it was also negative. Yet, I was asking something which is about the scientific equivalent of: Have you read a work of Shakespeare's?”

The lecture was published as 51-page booklet entitled The Two Cultures and the Scientific Revolution (1959) and later expanded into a larger 107-page The Two Cultures: and a Second Look: an Expanded Version of The Two Cultures (1965); both of which having gone on to stimulate several other books on the same subject. [3]

“The age of Faust [1772-1882] had been the age of the ‘Renaissance man’, a time when the possibility of a universal knowledge, mastery of the arts and sciences, still seemed to be open to the ambitious mind; [thereafter] the separation and dispersion of intellectual endeavors, dubbed the ‘two cultures’ by C.P. Snow, [resulted]; [in the years to follow, individuals such as] Thomas Young, Humphry Davy, and William Hamilton, could all make serious claims to humanistic breadth, if not universality, in their intellectual accomplishments; nevertheless, a rift between the arts and the sciences was evident.”

In short, Burwick, attributes the intellectual rift to have emerged following the passing of Goethe (1832), which seems to be correct, being that Goethe, and his 1799 elective affinities theory, was the last to successfully bridge the gap between the physical sciences and the social sciences.

Education
Snow completed his BA at Leicester University, and in 1930 his PhD in physics at Cambridge. [5]

Quotes | On
The following are quotes on Snow:

“Luddites and anti-intellectuals do not master the [partial] differential equations of thermodynamics or the biochemical cures of illness; they stay in thatched huts and die young.”

Quotes | By
The following are quotes by Snow:

“I believe that intellectual life of the whole of western society is increasingly being split into two polar groups: ‘literary intellectuals’ at one pole, at the other ‘scientists’, as the most representative, the physical scientists. Between the two, a gulf of mutual incomprehensibility, sometimes, particularly among the young, a hostility and dislike, but most all a lack of understanding.”