In music chemistry, Chemical Party is a 2008 1:30-minute human chemistry style, periodic table parody video, of sorts, produced by Marie Curie Actions group, in which people at a party are each labeled as being certain types of atoms: carbon (C), hydrogen (H), argon (Ar), krypton (Kr), radon (Rn), helium (He), Zinc (Zn), etc., and as such react with each other in same manner as do each of those respective elements react with each other in reality.

The original article title promotional of the video was “Marie Curie Actions presents Chemical Party: Sexy Carbons, Bored Noble Gases, Explosive Reactions”. [1] The song to the video is the 2007 song “Fledermaus Can’t Get It” by Von Sudenfed. The video was directed by directed by Roderick Fenske. As of 2012, the video has received somewhere around 2-3 million views.

HCl + Zn
The following is the HCl + Zn reaction, the first reaction shown in the video, depicted by a new dance partner displacing the former dance partner:

or in words: hydrochloride + zinc "yields" zinc-chloride + hydrogen, the mechanism of which, taking place in 5-seconds, is shown below:

Stoichiometrically, to note, the balanced reaction would be:

Thinkers to discuss this type of logic verbally, as a basis to replace religion (or standing belief system), in include: Johann Goethe (1809), to replace Christianity, Henry Bray (1910), to modify Christianity with god-based, evolution-reformed, panbioism-themed monism, and Vladimir Cruz (2012), expanding on Goethe, as upgrade alternative to communism (or socialism).

H, Ne, and C reactions
The following shows the second "Chemical Party" video reaction, namely the first attempt at mixing of hydrogen H plus neon Ne, followed by the introduction of carbon C to the reaction system:

The first mingling of elements, between Ne and H, does not result in any combination, being that experimentally it is found that hydrogen can combine with all of the second role elements, which are shown below, except neon, to make molecules: [3]

Neon is a stable element "by itself" being that its valence shells are filled with eight electron, thus satisfying the octet rule (Abegg's rule); it is thus electromagnetically stated, as far as its protons and electrons are concerned (see: floating magnet experiment). The following shows the different potential reactions to hydrogen, which indicates that the half-filled hydrogen 1s orbital can combine with any other half-filled orbitals of second row elements (except neon) to form bonds: [3] 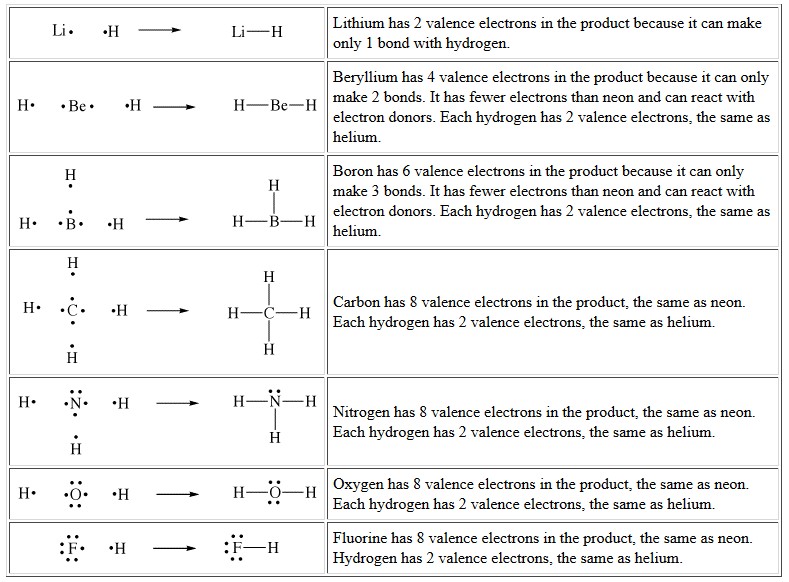 The video portrays a homosexual reaction preferred over a heterosexual reaction. Statistically, these types of reactions, for humans occur at a rate of about 3% of the population. Thinkers to discuss homosexual relationships via human chemical reaction theory include: Christopher Hirata (2000), Libb Thims (2007), and Thims in dialogue with Mirza Beg (2014), who, having his physiochemical sociology theories anchored in Islamic beliefs, rejected the assertion that some homosexual relationships can be more stable, and therefore preferred thermodynamically (see: Beg-Thims dialogue).

The video also shows, below left, neon Ne leaving with a "sad" face after being rejected from the reaction, which is paralleled in Goethe's Elective Affinities (P1:C4) wherein, in the reaction between limestone, i.e. calcium carbonate (CaCO3), and sulfuric acid (H2SO4), which upon contact yields gypsum (CaSO4·2H2O), in the form an aqueous crystal, and carbon dioxide (CO2) gas, to compared and contrasted with the reactions that are occurring between the main characters in the novel: Charlotte (carbon dioxide), Edward (lime), Captain (sulfuric acid), the mention of the "poor acid gas" is addressed in attempts, as shown below right:

Interesting, in comparing the 2008 version as compared to the 1809 version, is how "secularily numb" culture has become to reality; Goethe addressing the deeper roots of the problem: choice, morality, god, etc., the modern version seemingly rug sweeping all of these deeper issues under the implicit or non-mentioned guise of soft humor.

The video also shows the various combinations of carbon to hydrogen:

The following are other video depictions:

Discussion
The following are some of the top comments from the various versions of the video around:

One of the salient yet prevalent aspects about this video, as indicated by the above selection of popular comments, aside from the obvious fact that it is quite entertaining to watch, is that the video highlights very clearly global ignorance, not just in Europe, where the video stems, but especially so in America, and in other countries where the video has been remade, high school to college level.

In a sense, as the last comment indicates, the video does seem to give a gist of what can be described as chemistry or rather human chemistry "for dummies", which according to psychological classification is someone with an IQ below 90. On the other hand, quite paradoxically, in what seems to be the complete polar end of the spectrum, the subject of social chemistry, as Henry Adams so right spelled things out over a hundred years ago, does indeed require the "aid of another Newton" and this is evidenced by the fact that the elective affinities problem is the single most common genius puzzle that IQ=225+ genius are drawn to like magnets.

As of 2002, it has indeed been determined, by Sterner and Elser, that a human is a molecule with a measurable human molecular formula; and indeed, in 1910, the first book on human chemistry was written by English-born American navel and chemical engineer William Fairburn; and indeed the subject of "human chemistry" was founded in 1796 by German polygot Johann Goethe (IQ=230) with his human elective affinities reaction theories, a work that he considered his greatest work; which amounts to the conclusion that the "Chemical Party" video is scratching away, in a humorous manner, at a yet unearthed volcano of a very complex subject, embedded in the minds of geniuses past, like a thorn waiting to be removed; or as Victoria Woodhull, America’s first female US presidential candidate, put it in 1871, in summary of Goethe’s work: “A great revolutionary doctrine pervades the whole.”

What this indicates is that there is indeed a vast disjunct between what children are actually taught in school and reality as it is actually studied by the greatest geniuses of all time, Goethe (IQ=230), Schopenhaurer (IQ=185), Hirata (IQ=190), Adams (IQ=190), etc., which amounts to the first two-decades of the typical human education process, especially in America, being a complete waste of time, to say the least. The 2010 Mitch Garcia and Marcin Borkowski ChemistryForums.com thread responses to the query "Should Human Chemistry Be Taught In School?" is testimony to this viewpoint. [2] The following remakes show just how far down the two-hundred year decent into prolific ignorance we as a global community have fallen since the days of the great epicenter geniuses (Aristotle, Voltaire, Goethe, and Einstein):


Intellectual de-evolution | Decline
It is difficult to put into words, but the above videos show just how childlike we as a culture have descended down into blissful "learned ignorance"; having been put through what seems to well be classified as a cookie-cutter educational upbringing, which by virtue of the two-cultures, three-cultures, four-cultures, or more correctly growing poly-cultural divide of modern knowledge, there is a great disjunct in the various schools of knowledge, one of the repercussions of which are the results shown in the above six videos. The whole situation is nearly abysmal in what seems to be a spiral descent into prolific ignorance of the big questions of human existence. The following two-hundred year comparison,1809 view compared to the 2009 view, shows difference between the state of of the decline in basic human knowledge of existence:


Goethe would probably turn over in his grave if he saw how stupid we've become?