In etymologies, chemistry derives from Coptic word for "Egypt", kēme (pronounced: chem), the name of the fertile black colored soil, carried down to Egypt from the Ethiopian highlands, left behind following the annual flooding of the Nile river; thus a name for the art, practiced in ancient Egyptian (particularly in Alexandria), of making various precious metals, dyes, and gems, such as described in steps in various ancient papyri recipes (Leyden Papyrus, Stockhom Papyrus, etc.), the science of which attributed to books of the lost Library of Alexandria; an etymology thus meaning the study and art of the transmutation of the elements.

Overview
The following is the hieroglyph for the name Egypt or kmt meaning "black" pronounced "Khme" in Coptic, as the Egyptians defined their own country: [4] 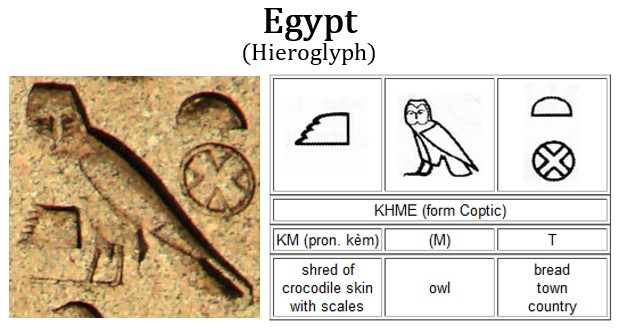 The feather looking symbol is a "black crocodile skin", pronounced "kem", the bird is an owl, the "half moon" symbol is bread and stand for the letter "t", the circle with a cross in it means "city".

In the first millennium BC, the Greeks, from Lycurgus (850BC) to Manetho (275BC), all travelled to Egypt to study in their great colleges, after which the began to call the so-called “kemetic art”, related to recipes for working with metals, dying cloth, and for preparing false silver, false, and false gems, as evidenced by two Egyptian chemistry papyri (c.300AD), found in a tomb in Thebes, namely the Leyden Papyrus X and the Stockholm Papyrus, by the Greek name Greek name χημεια or “Chemeia”, such as found in the works of Zosimos of Panopolis (300AD), phonetically sounded out as follows: [3]

In 100AD, Plutarch, to exemplify, was referring to Egypt by the Greek name chemia as follows:

“Egypt, moreover, which has the blackest of soils, they call by the same name as the black portion of the eye, ‘Chemia’, and compare it to a heart; for it is warm and moist and is enclosed by the southern portions of the inhabited world and adjoins them, like the heart in a man's left side.”

In 296AD, an official government documented of use of the term “chemeia”, in reference to books of the Egyptians (in Alexandria) on making (i.e. imitating) gold and silver, first occurs in an edict of the Emperor Diocletian, given by Suidas (tenth century) from an older source, wherein the emperor order all such books to be burned. 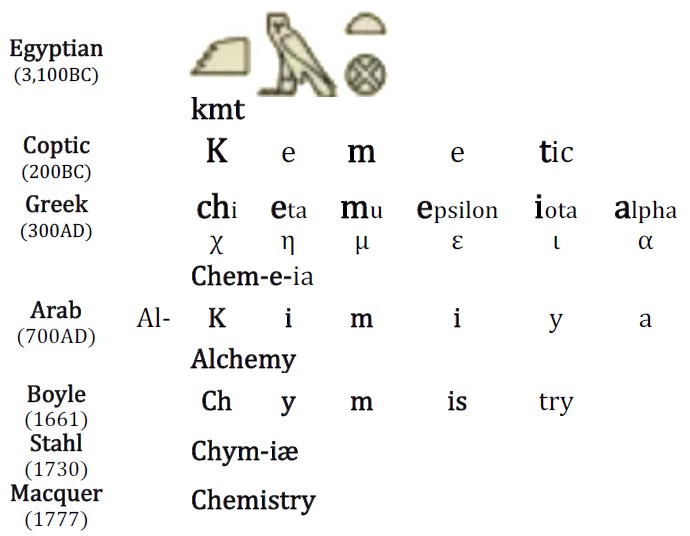 In 642, after the fall of Greco-Roman controlled Egyptian empire, the Arabs took over control of the Library of Alexandria, whose books began to be translated into Arabic, through the course of which, amid the Islamic golden age (800AD-1200AD), the Greek name “Chemeia” was re-named “al-kimiya” (alchemy), i.e. “the Egyptian art” or “the black art”, as it was called in the time of Johann Faust (c.1530) who was famed for this science (Partington, 1837). [4] In the century to follow the publication of Robert Boyle’s The Sceptical Chymist (1661), and particularly the publication of Newton’s Query 31 (17818) the term alchemy slowly transformed into chymistry and then chemistry, as the science progressed in refinement.

“The word ‘chemistry’ seems to be of Egyptian origin, and to have been originally equivalent to our phrase natural philosophy in its most extensive sense.”

“No animosity is shown toward Egypt in the Jewish Scriptures. On the contrary they are favored (Deut. 23: 3-4-, 7-8). The word Chem [keme], the name of the country, is, indeed, attacked in the incident of cHam the son of Noach, but that was evidently on account of the Canaanites, and belongs to the Ezraic policy of exclusiveness.”

“Chemistry implies that the amalgamation of metals was its first occupation, and many see in that form of the word a reference to Chemia, which is, according to Plutarch, an old name of Egypt, in which this amalgamation was first practiced with success. The word druggist came from the drugs he sells.”

“The art of alchemy was handed down through the centuries from Egypt and Arabia to Greece and Rome, and finally to western and central Europe. The word is derived from the Arabian phrase ‘al-kimia’, which refers to the preparation of the stone or elixir by the Egyptians. The Arabic root ‘kimia’ comes from the Coptic ‘khem’ that alluded to the fertile black soil of the Nile delta. Esoterically and hieroglyphically, the word refers to the dark mystery of the primordial or first matter (the Khem).”