In science, the chemistry of love is a popularized term that refers to any of various overview attempts or outlines to explain love in terms of the science of chemistry.

“You can’t force chemistry to exist where it doesn’t in the same way you can’t deny it when it does.” 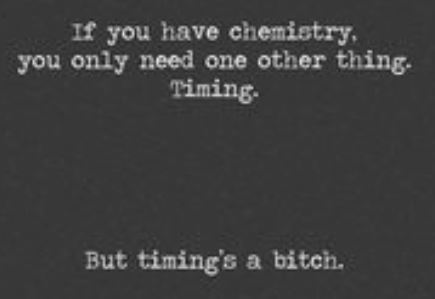 In other words, per collision theory arguments, two people may be thermodynamically feasible to bond, but the alignment of their reaction trajectories may be off or misaligned in time.

History
The earliest ideas on the chemistry of love can be found in early Egyptian poems, alluding to ideas on chemical bonding. One circa 1000BC poem speaks, for instance, of how "the nets of your love have trapped me". [1]

Into the latter half of the second millennium, the theory of love potions was invented, supposing that a drink of a certain mixture could a suitor fall in love.

In 1809, German polymath Johann Goethe was the first to use a standard physical chemistry textbook to formulate a standard theory of love, based on the logic affinity chemistry and affinity reactions.

in 1922, the "chemical reaction theory of love", the view that “love is in its ultimate analysis nothing but a chemical reaction”, was established in the minds of typical scientists. [2]

Neurochemistry
With the rise of the field of neuroscience and the initiation of neurochemistry, the study of the chemicals of the brain, new chemical based theories of love began to crop up. A few of these are listed below in chronological order:

New models are starting to focus on other neurochemicals such as serotonin or dopamine, etc., as well as neuroimaging, e.g. fMRI images of couples in love vs. people not in love.

Standard model
The standard model of the chemistry of love, as of 2007, holds that (a) a human is a molecule (a human molecule), and (b) that “love” or rather two people falling in love into a relationship is a chemical reaction, pure and simple, and (c) human reactions, such as love the chemical reactions, are governed by the Lewis inequality, as are all earth-bound reactions. [3]