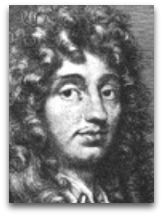 Wave theory of light
Huygens lens grinding work led him into an investigation as to how lens work, research that resulted in several published papers on light.

In 1677, he observed how Iceland spar spit light into two parts, rotated through different degrees.

In 1678 paper communicated to France's Royal Academy of Sciences, in which he suggested that light is a series of shock waves, spreading in wave fronts generated by impacting light particles and making waves among the tiny particles of the ether, the invisible substance permeating the universe. [4] This is now known as the wave theory of light. In his 1690 Treatise on Light, he summarized: [3]

“I have thus shown in what manner one can imagine that light propagates successively by spherical waves.”

The later theory of light by Isaac Newton in his Opticks (1704) proposed a different explanation for reflection, refraction, and interference of light assuming the existence of light particles. The double slit interference experiments of Thomas Young vindicated Huygens' wave theory in 1801, as the results could no longer be explained with light particles; these two views, following the invention of the light quanta (photon), resulted to yield the wave-particle duality model.

Vacuum pump
In 1647, Otto Guericke invented a vacuum pump; the invention was described in the 1657 book Mechanical Hydraulic Pneumatics by Gaspar Schott. [2] In Jan 1658, if not earlier, Robert Boyle had learned of Guericke's vacuum pump work, referring to it as the beautiful "German vacuum", and by early 1659, Boyle had Robert Hooke make a vacuum pump for him.
-
In 1661, Huygens, during his visit to the Royal Society, learned about the vacuum pump, from Boyle, who pointed out its many experimental possibilities. [8]

In late 1661, Huygens, upon his return to Holland, had built his own vacuum pump by the end of the year, and had done a test where he put a water column barometer in the vacuum bulb and also a second water column barometer, under a vacuum bulb, the latter with boiled water, which had been purged of air bubbles. He found that the normal tap water fell, but that the boiled water stayed at the same height. [8] The following is a summary of this:

“Huygens’ most important contribution to pneumatics was his discovery of ‘anomalous suspension’ (Ѻ) in 1661. He had purged water of air, and filled a barometer with this water. Next, he put the barometer under his recipient [vacuum bulb] and evacuated it. To his astonishment, the water in the barometer did not descend. Today, the phenomenon is attributed to adhesion between the water and the glass tube, but in Huygens time it was rather puzzling. Boyle initially denied the effect, because he could not produce it with his own pump. He suggested that Huygens’ pump could not evacuate sufficiently. Huygens on the other hand (correctly) believed it was Boyle's pump that was detective.” 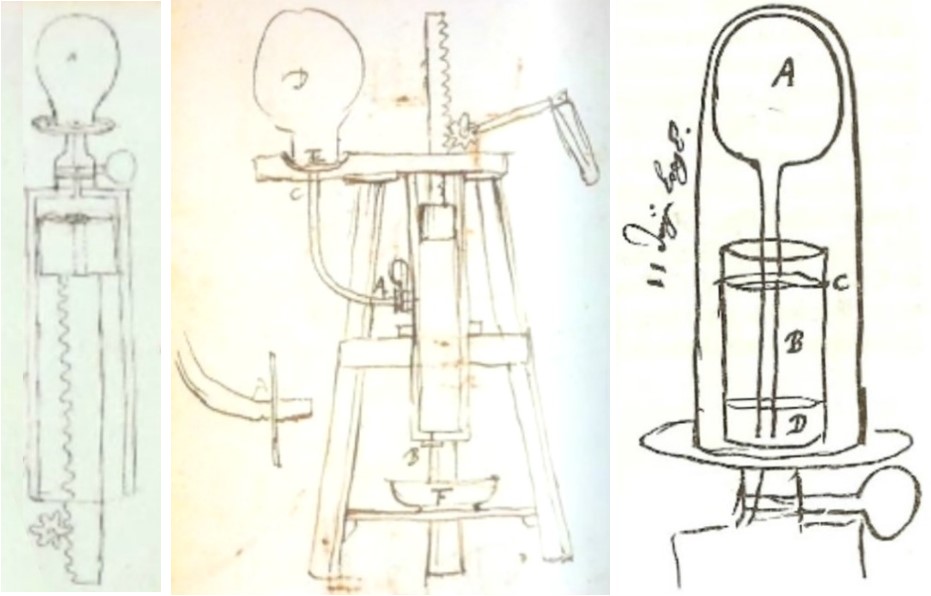 In 1662, Huygens built a second vacuum pump, employing his "own design", as shown below; first published by Denis Papin (1674), and later reprinted by Huygens. [8] This Huygens vacuum pump design, as shown, has the piston O inverted, with the rack H and pinion D on the top, done so that he could pour water on top of the piston, after O was fitted into cylinder LM, where by the piston would be pulled or cranked upward, the idea being to use the weight of water to improve air-tightness: [10] 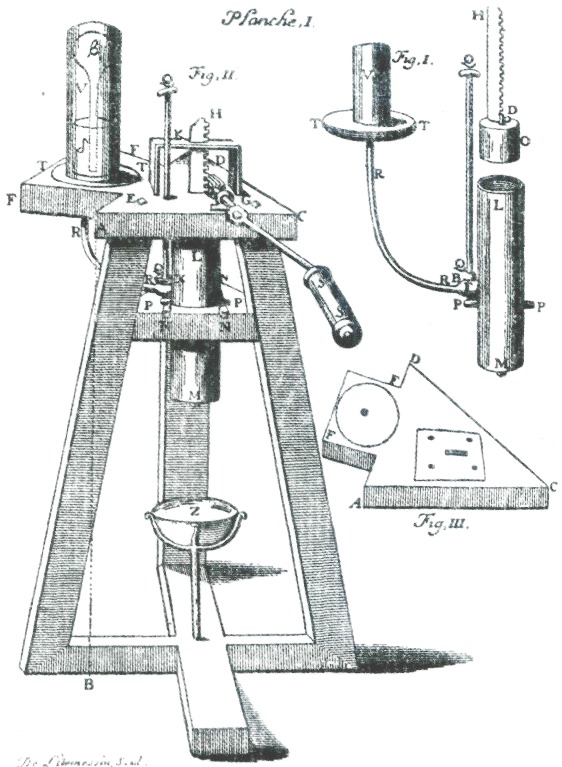 Boyle, supposedly (Helden, 2003), was the one who introduced Huygens to the merits of experimenting with vacuum pumps, and it was Huygens who constructed the first air pumps in Holland and France, with the assistance of Denis Papin. [7]

Some time prior to 1674, French physicist Denis Papin moved to Paris and assisted Huygens in his experiments with the air-pump and gunpowder piston and cylinder engines, the results of which Experiences of the Void (Experiences du Vuide) were published at Paris in that year, and also in the form of five papers by Huygens and Papin jointly, in the Philosophical Transactions for 1675. This association was a precursor to Papin’s later invention of the first steam engine in 1690.

Education
Huygens was the well-traveled son of a rich and prominent Dutch family, that had entertained Rene Descartes. Huygens studied mathematics and law at the University of Leiden, spent time at Paris and London, where he met Isaac Newton, among other important people, and thereafter soon became an avid experimenter. In 1655, prior to developing skills as a lens-grinder, he and his brother built a telescope and discovered Titan and the rings of Saturn. [4]

Religion
In 1693, Huygens, in his The Celestial Worlds Discovered (Ѻ), gave a short history on extraterrestrial life theories, at the end of which he invoked the hand of god in his reflections of the intricate design seen throughout the world. [5]

Quotes | On
The following are noted quotes on Huygens:

“About 1678, Huygens constructed a cylinder and fitted it with a piston, with a weight of some 1600 lbs., which he forced up for five or six feet by means of a thimbleful of powder, in a gentle manner, and the return of which to the bottom of the cylinder lifted ‘into the air’ four or five boys who held on to the rope. Huygens appears to have rested satisfied with exhibiting this engine, and registering it in the Academy, but Papin, who had brought a copy of his treatise to Boyle, was employed by the latter, and for about three years was continually engaged with air-pumps and his private invention of the ‘digester’. Papin oscillated between London and Paris for a few years, and twice held an appointment under the Royal Society, introducing many remarkable inventions to their notice. About 1687, he was appointed Professor of Mathematics, at Marburg, and appears to have taken up the gunpowder and air-engine, which he had become familiar with whilst assistant to Huygens. Papin published his account of his experiments in the Acta Eruditorum, and in that periodical for 1690 appears the description of his famous memoir in which the suggestion of a vacuum produced under a piston by the condensation of steam was first suggested. Huygens himself acknowledged the ‘inconveniences’ of attempting to produce a series of vacua by exploding gunpowder, and as Papin says, ‘he, therefore, endeavored to attain the same end in another way’, and he ‘at once saw’ (after making some experiments) that ‘machines could be constructed in which water, by the help of a moderate heat, and at little cost, might produce that perfect vacuum which could by no means be obtained by the aid of gunpowder’. Papin proceeded to describe the construction which, amongst many he had devised, seemed ‘most suitable’, and he concluded by proposing to apply the power thus obtained for drawing water or ore from mines, for discharging iron bullets to a great distance, for propelling ships against the wind, and for a number of other purposes; but—and this is an important point in apportioning him his place on the roll—he does not appear to have constructed any successful engines, although Figuier gives an imaginative picture of the destruction of Papin's steamboat in 1695 by the bargemen of the Seine. Saussure and Pean give the credit of this act to the boatmen on the borders of the Hessian territory.”

“About this time Huygens had as his assistant Denis Papin, a Frenchman who later worked with Boyle in England. With Papin, Huygens in 1673 experimented on gunpowder as a source of mechanical energy. There is a possibility that Huygens had considered some kind of atmospheric engine as early as 1660 when he talked with Pascal about the ‘force of water rarefied in cannons’. In these experiments of 1673, we can see the forerunner of Papin's atmospheric engine, which did in fact employ steam in place of gunpowder. Papin was later, through the interest of the Landgrave of Hesse, appointed professor at the university of Marbourg and it was here that he developed the atmospheric engine which gave Newcomen his clue. In exchange for Papin, as one might say, Oldenburg sent over to Huygens the wealthy young amateur Walter von Tschirnhaus, a friend of Spinoza and Leibnitz. He belonged to a class which had early supported the new scientific.”

“The famous controversy between Newton’s emission theory and Huygens’ wave theory of light is also a phantom problem of science.”

“Huygens calculated that a single pound of gunpowder could raise 3,000 pounds a distance of thirty feet. In a 1673 experiment he managed to lift a weight using a small cylinder.”

“Saw Chapelain, Conrart, Roberval. Didn’t find Carcavy. The duc de Roannez came to see me, and Pascal later. Talked about the force of steam in their cannon and about flying. I showed them my telescopes.”

“In all of [Descartes'] physics, I find almost nothing to which I can subscribe as being correct.”