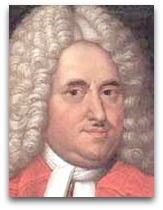 Overview
In 1705, Thomasius, in his The Foundation of the Law of Nature and Nations, opposed Aristotelianism, Lutheranism, the divine right of Kings and Roman Law, instead promoting a non-theological, natural foundation for ethics following in the style of Hugo Grotius and Samuel Pufendorf, a Hobbes + Grotius synthesizer. [1]

Genius rankings
Thomasius tends to be ranked, along with Christian Wolff and Moses Mendelssohn as precursors to Immanuel Kant [RGM:20|1,360+] and German empirical psychology.

Quotes | On
The following are quotes on Thomasius:

“Thomasius, one of the founders of the University of Halle, who daringly lectured in German, not Latin, famously argued that nature, the source of law, exists independently of god's will, and that ethics stem from a ‘special physics’ — the empirical science of (human) nature. He devised what he called a ‘calculus of the passions’ as a result of which rational judgments about conduct are (should be) made possible. He went so far as to assign numerical grades to the various passions on a scale from five to sixty. The precision of this system seems absurd now but its importance lies in the fact that Thomasius conceived human nature as a psychological entity, not a theological one.”