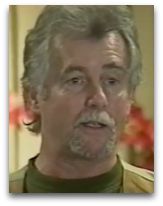 In hmolscience, Christian de Quincey (c.1955-) is an American philosopher noted for his 2002 book Radical Nature, in which he argues that consciousness, spirit, and soul extend all the way down the evolutionary ladder to the atoms and molecules and beyond, and in doing so attempts to dispel the ‘mindlessness of matter’ view, that matter is inert and ‘dead’, and thus bring about dialog between the materialist and dualist schools of thought.

Panpsychism
The gist of his work seems to be to addressed in the following query:

“How can a science of ‘dead’ matter ever account for the fact of consciousness?”

Quincey discusses thermodynamics in a few instances, discussing complexity theory, chaos theory, the far-from-equilibrium type dissipative structures theories of Ilya Prigogine, and the order-disorder paradox of the second law in relation to evolved ordered life (order from disorder) and the disorder tendency of entropy for isolated systems. In short, de Quincey's thesis is that if we adopt the panpsychism view of nature and assign consciousness to all matter, the premise of 'self-motion' to all entities of the universe, e.g. that an atom chooses to move itself from some internal principle, that photons have free will, etc., that this paradigm shift will dispel what he perceives as the standard materialist view, which views culture and civilization as a meaningless collection of atoms.

Influences
As discussed in his acknowledgments section, de Quincey's 'allies' are French philosopher-theologian Pierre Teilhard, and his 1936 The Phenomenon of Man, which promotes the view that consciousness accompanies matter and that matter-energy and spirit are intertwined, and Teilhard's 'compatriot' French philosopher Henri Bergson, and his two books Creative Evolution and Matter and Memory, which argue for that an elan vital or creative impulse, i.e. vitalism, exists in the course of the evolution. A third noted influence on Quincey are the views of American mathematician-philosopher Arthur Young, whom de Quincey studied under for several years, and his ideas that the photon, or quantum of action, acts as the fundamental unit of being and becoming in the course of the events and processes of human existence. [1] Another thinker de Quincey is: Steven Rosen.

Extrapolate downward | Model
The central methodology de Quincey uses in his theory is the "extrapolate downward approach" (apply anthropomorphism to explain chemistry and physics), as contrasted with the "extrapolate upward approach" (apply chemistry and physics to explain human behavior). To give an example of this, de Quincey states "as we know it to be certainly true, consciousness and the ability to make choices exist in our own case, then we can generalize and say that consciousness and choice exist at the macro level [and micro level]", and say that "some entity, say an electron or photon, is exercising its self-action, free will, or choice in how it will move." [1] The use of the term “self-caused” is cited as a coinage of American philosopher Arthur Young, who argues that the actions of subatomic entities, such as electrons, are self-caused, in a quantum mechanical or photonic sense, somehow. [13] In other words, both Young and de Quincey are attempting to argue that electrons, as well as any other atomic or subatomic particles, has free will, in order to justify the anthropomorphic conception that humans have free will, knowing that humans have evolved overtime from subatomic precursors.

Quotes | Self-motion
The following are example quotes, in respect to self-motion arguments:

“By ‘mechanical’, I mean matter that is moved about entirely by external forces—for example, the colliding and ricocheting of atoms like so many billiard balls, or even the invisible fields of force pushing and pulling matter through its gyrations. In a purely mechanical universe, all motion of matter is caused from without, there is no possibility of self-motion and therefore no possibility of aim or purpose.”

“The universe is either already ‘dead’ or it is meaningful. If it is ‘dead’ in this sense of being wholly mechanical, without any intrinsic capacity for self-motion and feeling, then all instances of life and consciousness in the universe are ultimately insignificant evolutionary by-products. If this is true, then the universe would be essentially meaningless, it would be ‘absurd’, just as the existentialists Sartre and Camus said. All meaning would be contingent, created by minds that themselves arose by chance from blind mechanical collisions of atoms in the void.”

“For hundreds of years we lived in a world without a soul, a world made of matter and energy that lacks feeling and self-motion, a world without purpose or deep meaning. This, at least, is the complicated tale told to us by modern philosophy and science. Our culture’s dominate story, our materialist worldview and big bang cosmology, cannot account for the fact that anything like a storyteller, a conscious, feeling, observing, meaning-seeking being, could ever exist.”