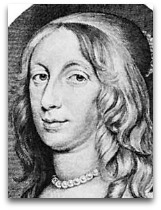 In existographies, Christina Alexandra (1626-1689), aka Queen Christina, born “Christina Adolphus”, baptized as “Christina Augusta”, and renamed “Christina Alexandria”, her adopted name, which she signed letters with, was Queen of Sweden from 1632 to 1654, characterized as “one of the wittiest and most learned women of her age” (Ѻ), noted for []

Enlightenment
Alexandra seems to have been an intellectual of sorts. She amassed a enormous collection of books and manuscripts, which is now in the Vatican library.

In 1645, Alexandra got Hugo Grotius to become her librarian; he died (dereacted), however, before he could realize this role. She associated with Blaise Pascal, who offered her a copy of his mechanical calculator. She was said to actively searched for a copy of The Treatise of the Tree Impostors.

Descartes
Alexandra was a fan of Alexander the Great, famously tutored by Aristotle, and like him, she desired to be educated by Rene Descartes, and got him to come to Sweden to organize a “scientific academy”. On 4 Oct 1649, he arrived via boat with 2,000 of his books. On 11 Feb 1650, four months later he was dead.

“Virgil, the bishop of Saltzburg, was condemned by the church, for having dared to maintain the existence of the antipodes. All the world is acquainted with the persecutions which Galileo suffered for pretending that the sun did not make its revolution round the earth. Descartes was put to death in a foreign land.”

Reasoning has it that he was poisoned by her priests, who feared the potential influence of his mechanical philosophy.

Quotes | By
The following are quotes by Alexandra:

“I have received your father's book which you have sent me. I thank you with all my heart for it and can tell you that I have read it from cover to cover with great care and pleasure. Others are better capable than I of judging its worth and expressing their esteem but my ignorance does not inhibit me from saying that I consider this work to be one of the most worthy and admirable of our century. The experiments, beautiful as they are, have been repeated by others at Paris, London, Florence and even here at Rome. But the deductions and new ideas, or rather conjectures, which he infers from them, are, as it seems to me, specific to him — at least I have read nothing similar — unless British astronomy, which I have not yet had the leisure to consider, has produced something comparable. Be that as it may, it seems to me that no one else but your father has given us an idea of the universe so worthy of its adorable author. I leave it to the mathematicians and astronomers to argue his system with him; for myself, I assent willingly to most of his conjectures, in so far, of course, as is permissible to me by the authority of the Church of Rome. Meanwhile, I thank you both for your gift and for the pleasure which the reading of such a beautiful book has given me.”