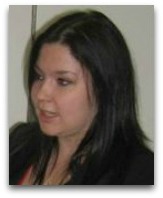 In existographies, Christine Kamla (c.1994-) (CR:4) is a Romanian thinker noted, in human chemistry, for her 2011 high school applied science project on reaction-based adoption, a pertinent topic in the post 1989 Romanian reconstruction era, after its break from communist-controlled socialism run government, in which she gave a said-to-be “brilliant lecture” entitled “If the Genes Are Not the Last Word: of Elective Affinities to Adoptive Families”, wherein she employs German polyintellect Johann Goethe’s 1809 elective affinity based human chemical theory to outline a modern human chemical reaction theory based model of the adoption process. [1]

Overview
In 2011, Kamla gave a presentation on the elective affinities of child adoption in terms of reactions, supposedly in some way modeled on the Ottilie adoption scenario of Goethe’s Elective Affinities in the context of modern adoption policies. The overview of her presentation is as follows: [1]

“Christine Kamla had the special topic "elective affinities" with the same group selected topic. She shared her brilliant lecture in "General", "Academic" and literary "(see poster image). Having discussed the conditions and the procedure for a child's adoption, she made an interesting trip into the chemistry and showed that even in this science some elements of their "Elective Affinities" pick, the finale was the reference to JWv Goethe's eponymous book, which also convert the fate of already existing relationships in the new Elective Affinities - The problematization resulted from the fact that when an adoption is an element of arbitrariness. must be excluded and you cannot adopt children how to shop goods in the supermarket.”

Some of the talk seems to have themed on how the laws of adoption and methods of differ between Romania and Germany.

Poster presentation
Photos from the presentation—with the poster board title “If the Genes Are Not the Last Word: of Elective Affinities to Adoptive Families” (“Wenn Die Gene Nicht Das LetƵte Wort Haben — von Wahlverwandtschaften Ƶu Adoptivfamilien”)—are shown below: 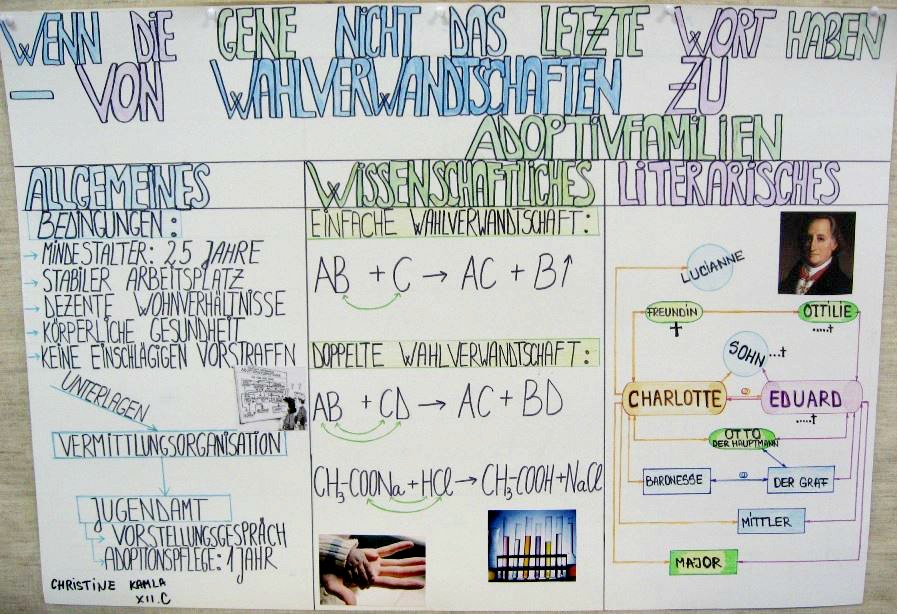 The following is a partially complete English-to-German translation of Kamla's adoption reaction diagram flow chart, which in some way shows the reaction flow of the adoption of Ottilie, Charlotte's deceased best friend (Freundin) into the home of the Charlotte-Edward family on the estate, wherein she seems to show some type of equilibrium or equilibration reaction (

) occurring between Edward and Charlotte, with some type of exchange entity (possibly sperm) over the two-way reaction arrow:

The following is a photo of Kamla during her talk: 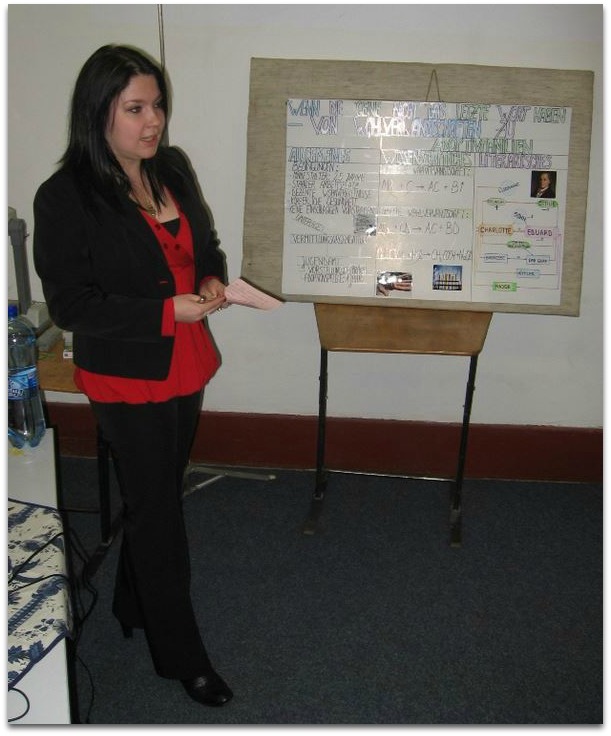 Very interesting indeed, hardly anything remotely coming close to this can be found in any American schools.