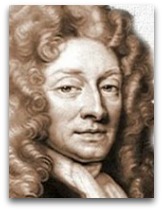 Quotes | On
The following are quotes on Wren:

“Newton recalled from a conversation in 1677 that Wren had known the inverse square law then, before Hooke, and asked Haley to find out when Wren had first learned of the law.”

— Stephen Inwood (2002), The Man Who Knew Too Much (pg. 362); on the response of Newton to the news by Edmond Halley that Hooke wants acknowledge credit, in the second book of Principia, for his work on the inverse square law [1]