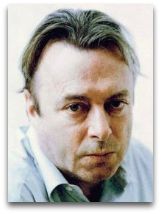 In existographies, Christopher Hitchens (1949-2011) (IQ:170|#321) [RGM:313|1,500+] (FA:215) (CR:65) was an English-born American atheist philosopher, political and literature commentator, auto-characterized "anti-theist", i.e. someone opposed to religion, and random selection chance based (Ѻ) theorist, noted for his 2007 God is Not Great, one of the books in the new atheism movement, wherein he grapples with the Moses pens his own death problem; and atheism vs religion debates with those including: William Craig, Alister McGrath, and Frank Turek, among others.

Overview
In 2005, Hitchens, in his “Equal Tax: No Tax-Exempt Status for Churches that Refuse to Distribute Pro-Evolution Propaganda!”, reflected on how the Huxley vs Wilberforce debate was one of the memorably points of his education, himself setting the stage to be come a new Huxley, in his own mind, so to say: [4]

“I found myself asking: How do I know about Darwin to begin with? And the answer was this: I was taught him as part of history as well as part of biology. After the voyage of the good ship Beagle and the amazing discoveries that attended it, Darwin decided to change his own theistic views and also to challenge the rooted conceptions of Christian Victorian society. He succeeded beyond any expectation. The great set piece, which I was taught in school, involved the debate at Oxford between Darwin's supporter Thomas Huxley (ancestor of Aldous and Julian and coiner of the word "agnostic") and Bishop Wilberforce, known even to his own flock as Soapy Sam. In front of a large audience, Huxley cleaned Wilberforce's clock, ate his lunch, used him as a mop for the floor, and all that. It was a "tipping point." After that, there were still those who believed that god had put fossils in the rock to test our faith, and those like Bishop Ussher who claimed to have dated the birth of the world to an exact time (4004 BC), but they were a spent force.”

In 2007, Hitchens published his God is Not Great: How Religion Poisons Everything, which catapulted him into the top slot of the new atheists.

In Jul 2008, Hitchens, in his debate with Dinesh D'Souza, cogently digressed on how the Jesus was a fabrication and also on how exodus was fabrication. [2]

In Sep 2008, Hitches debated Frank Turek, amid which Turek employed the if were just "molecules in motion", a seeming new apologetics tactic, where does the atheist get their sense of morals from query, directed at Hitchens: [3]

“Now Christopher talked about atrocities, but again, on the atheistic world view—here’s the main point—how do you define what an atrocity is? Who defines it? Who has the authority to define what an atrocity is? The carbon atom? The benzene molecule? I’m not saying you have to believe in god to be moral. I’m not saying that only religious people are moral. I’m not saying atheists can’t be moral. I’m not saying atheists don’t know morality. I’m saying there’s no way to justify what is right and what is wrong unless there's some authority that provides it. What is the authority? In a materialistic world view there is no authority. The carbon atom has no moral authority over you. And it seems that Christopher goes on and on about how he does not want to be under any some kind of divine totalitarianism. That is a moral rejection of god. Where does he come up with this immoral totalitarianism? His world view does not afford immorality because his world view does not afford morality. He has to borrow from the Christian world view in order to argue against it. In fact, he has to sit in god’s lap to slap his face. Where does he get morality from?”

Suicide
In Nov 1973, Hitchens, aged 24, learned that mother committed suicide in Athens in a pact with her lover, a defrocked clergyman named Timothy Bryan; the pair overdosed on sleeping pills in adjoining hotel rooms, and Bryan slit his wrists in the bathtub.

In 1987, Hitchens, aged 38, learned from his brother Peter, who had visited their maternal grandmother, who was in her 90s, that his mother’s side of the family was Jewish. (Ѻ)

Quotes | On
The following are quotes on Hitchens:

“Hitchens was wonderfully witty, immensely erudite, seemed to have read absolutely everything, he could quote by the yard. He was a devastating wit and his opponents in debate had reason to regret taking him on. Martin Amis said that he would triumph even against Cicero and Demosthenes.”

“I think Hitchens was probably the best orator I’ve ever heard. He was a stunning public speaker. Beautifully modulated, he was extremely quick on his feet, extremely well read, erudite, resourceful and charming at the same time.”

“A genius is someone who is so intellectually powerful as to overawe an even intelligent audience, and believe me, of the four horsemen, Dennett, Dawkins, Harris and Hitchens, none could hold a candle to Hitchens—his enormous breadth and depth of knowledge from the classics, to Shakespeare, to being able to quote chapter and verse from the Bible, are rivalled by none.”

Quotes | By
The following are quotes by Hitchens:

“Gullibility and credulity are considered undesirable qualities in every department of human life—except religion. Why are we praised by godly men for surrendering our 'godly gift' of reason when we cross their mental thresholds? Atheism strikes me as morally superior, as well as intellectually superior, to religion. Since it is obviously inconceivable that all religions can be right, the most reasonable conclusion is that they are all wrong. Does this leave us shorn of hope? Not a bit of it. Atheism, and the related conviction that we have just one life to live, is the only sure way to regard all our fellow creatures as brothers and sisters. Even the compromise of agnosticism is better than faith. It minimizes the totalitarian temptation, the witless worship of the absolute and the surrender of reason.”

“You find me a state or society that threw off theocracy and threw off religion and said we adopt the teachings of Lucretius and Democritus and Galileo and Spinoza and Darwin and Russell and Jefferson and Thomas Paine, and we make those what we teach our children. We make that scientific and rational humanism our teaching. You find me that state, that did that, and fell into tyranny, and slavery, and famine, and torture, and then we’ll be on a level playing field.”

“I can’t find a seconder usually when I propose this, but I don’t care. I don’t need a seconder. My own opinion is enough for me, and I claim the right to have it defended against any consensus, any majority, anywhere, any place, anytime. And anyone who disagrees with this can pick a number, get in line, and kiss my ass.”

“I am more of an ‘anti-theist’, than an ‘atheist’. In other words, my view is not just that there is no reason to believe that there is a deity, and all the arguments that there is one, have all long since been ‘exploded’ by philosophers, astronomers, scientists, physicists, biologists, and so forth, mainly by philosophers though, but that it’s a ‘good’ thing that it’s not the case [that there is a god]. In other words, I do know some non-believers that ‘wish it was true’, who think it would be nice if there was a celestial dictatorship. I cannot want to make myself want there to be a celestial dictatorship. I think it would be the absolute definition of unfreedom, if there was an unchanging, undying, all-knowing father, who kept you under surveillance, before you were born, all your life, and after you were dead.”

“Picture if you will the following: that it is conclusively demonstrated that the figures of Abraham, Moses, Jesus, Muhammad, Joseph Smith, all the other ‘impostors’, are nothing more than that, namely legendary, mythical, for fraudulent figures.”

“There is, and there always has been, an unusually high and consistent correlation between the stupidity of a given person and that person’s propensity to be impressed by the measurement of IQ.”

“If Jesus, and Muhammad, and Abraham, and Moses, had never been born, which in any case I tend to doubt, or if all the stories told about them were untruth, as was suddenly found, and everyone had to admit it, some people, I know, would go into a panic, [thinking]: ‘now what will we do, we have no morals suddenly?’ What could be more nonsensical than that?”

“All religions are wrong in the same way, in that they privilege faith over reason, but they’re not all equally bad in the same way all the time. I mean, if I had been writing in the 1930s, I might certainly have said that the Catholic religion was the most dangerous religion in the world, because of its open alliance with fascism and anti-Semitism, the damage from that our culture has never recovered and never will. But at the moment, it is very clear to me that the most toxic form that religion takes is the Islamic form and the horrible idea of wanting to end up with Sharia law, with a religion governed state, a state of religious law, and that the best means of getting there is jihad or holy war, that Muslims have a special right to feel aggrieved enough to demand this, I think, is obscene, absolute wickedness, and I think their religion is nonsense—in its entirety. God speaks to some illiterate merchant warlord in Arabia, and he’s able to write this down perfectly, and it contains the answers to all—don’t waste my time, it’s bullsh*t!”

— Christopher Hitchens (2010), response (Ѻ) to Sufi Muslim on why he choose the literal negation of the phrase “Allah hu Akbar” for the title of his book God is Not Great, Mar 23; favorite Angela Jabari Hitchens quote (2017)