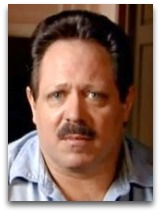 In existographies, Christopher Langan (1952-) (DN:1) (CIR:24) (CR:33) is an American autodidact, with a claimed IQ of 190 to 210 (2001), notable as a weed theorist who since circa 1990 as been promoting anti-reductionism (i.e. he argues for "informational reductionism", the view that the basis of reality is not matter and energy, but information), self-motion anthropic principle teleology-themed theory of intelligent design in order to prove the existence of god, via recourse a hodgepodge of standard melting plot theory + ontic opening polemics, namely: complexity theory, information theory, self-organization theory, Markoff processes (i.e. chance), via citation to fellow creationists such as David Berlinski (CIR:19), Michael Behe (CIR:1), William Dembski (CIR:5), intermixed with ideas of John Wheeler (quantum information), Kurt Godel (incompleteness), and David Bohm (holographic universe).

Self-theory
The following are 13 red-flag variants of the prefix “self-” employed by Langan, in his 2002 abstract alone, to promote his self-motion theory:

God | Soul | Afterlife
The following are Langan’s views on death, god, and the soul:

“There’s a subjective aspect to reality and to time. In other words, there’s nothing in principle what would stop your memories from being generated retrospectively from your current awareness of what’s going on around you. You can play certain tricks with time like that. As for where you came from and where you’re going, after you exit this mortal coil (see: Mor), you are and endomorphic image of god, and after you exit this mortal coil, you will be retracted upward along the mapping that created you, and you will have a chance to reunite with god. And if your soul has not been interdicted by some atrocious bad behavior, or refuseance or unwillingness to get with teleology, then you will be reunited with god. God lives forever. There’s no such thing as death.”

Here, as we see, Langan has become like a Deepak Chopra Patreon-funded preacher of sorts, selling his own unique new age version of god (a word he employs four times in the above response). Real geniuses don't talk like this when it comes to these terms (see: geniuses on).

In 1991, Langan, in his “Prologue to Buffoonery” letter, was promoting, among what he referred to as the “high IQ readers”, i.e. Mensa social gathering like people, his cognitive theory model of the universe. (Ѻ)

In Nov 1999, Langan became semi-famous when Esquire magazine, in their Genius Issue, shown below, ran an article dubbing him as “The Smartest Man in the World”, wherein interview commentary on Langan, claiming an IQ of 195, and Mega Test creator Ronald Hoeflin, claiming an IQ of 175, is presented. [1]

On 9 Dec 1999, the show 20/20 did an interview special on Langan, entitled “The Smart Guy”, during the course of which they had American neurophsychologist Bob Novelly supervise Langan in taking a two-hour IQ test, after which Novelly commented that Langan was the highest individual he has measured in 25 years. Cynthia McFadden, then interviewed Langan at his northern Missouri farm about his background and his work-in-progress mathematical proof of the existence of god theory, in which he comments how as a child he asked his grandfather: "is there a god?"; some of the interview dialogue is as follows: [4]

McFadden: You know, there’s a sort of expression, ‘If you’re so smart, why ain’t you rich?’ So, I say it to you.
Langan: Well, because there is no logical connection between being smart and having money. But if you aren’t necessarily focused on getting money in the first place, there’s no reason smarts should make money roll to you.

Langan: My [theory] provides the logical framework of the theory of everything. Yielding an enhanced model of space time, affording explanations of cosmogony, accelerating cosmic expansion, quantemonocality, the area of time, the physical and cosmological riddles that cannot be satisfactorily explained by other means.

In 2001, Errol Morris filmed a 30-minute interview with Langan entitled “The Smartest Man in the World”, wherein Langan claims that based on an Omni Magazine intelligence test that he boasts: [6]

“My IQ is somewhere between 190 of 210. I am closer to absolute truth than any man who has come before me.”

In 2002, Langan, published 42-page version of his theory, entitled “The Cognitive-Theoretic Model of the Universe: a New Kind of Reality”, wherein, as he reflects in 2010 interview retrospect, he attempts to put forward an teleological information self-motion theory argument for the existence of god, based on the following Biblical passage: [2]

“In the New Testament, John 1 (Ѻ) begins as follows: ‘In the beginning was the Word, and the Word was with God, and the Word was God’ (my italics). Much controversy has centered on this passage, as it seems to be saying that God is literally equivalent to logos, meaning ‘word’, ‘wisdom’, ‘reason’, or ‘truth’.”

Sometime, thereafter, Langan began to be a sort of Internet catchphrase, particularly in discussion forums. for anecdotal proof of the assertion “you can be smart and believe in god”, in an era where 95 percent of leading scientists don't believe in the existence of god.

In 2008, Malcolm Gladwell, in his Outliers: the Story of Success, featured Langan and his story, as an example of a social outlier. [3]

In 2009, American electrochemical engineer Libb Thims, in version 78 of his growing IQ: 200+ claimant collection, began to list Langan among people cited, referenced, tested, and or claimed to have an IQ of 200 or above; in 2010, Thims included Langan in the 37 person video version of this listing, entitled “IQ 200+ | Smartest Person Ever”, albeit Langan classified as one of the top three “IQ fakers” of the late 20th century, alongside Marilyn Savant and Rick Rosner. [5]

Education
At age 5, Langan his first book Snakes, Lizards, and Turtles. Early on he says, he was able to memorize large portions of books, but that from about age 6 to 14, he had an abusive step-father who beat him, and discouraged his intellectual development. Langan entered college, but dropped out after his mother forgot to send some type of academic scholarship form. He then became a “blue collar” worker, as he says, dabbling in reading, research, and god theory on the side.

“I would actually pay Libb $200 USD to debate Chris Langan on a talk-back radio program, in the near future.”

Quotes | By
The following are quotes by Langan:

“An atheist who considers himself “rational” has no choice but to deny that justice exists in any necessary sense, thus voiding any responsibility to explain its absence. And as the concept of justice flies out the window, so does any en-force-able basis for morality, thus reducing phrases like “moral atheist” and “atheistic morality” to meaninglessness.”