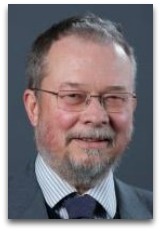 In hmolscience, Christopher Southgate (1953-) is an English biochemist noted for his 1993 to present publications and teaching efforts on the science-religion debate.

Overview
In 1991, New Testament scholar Richard Burridge suggested to Southgate that he use his background in experimental science to work on and discussion on the science-religion debate; which resulted in a course he began teaching at in 1993 at the University of Exeter. [1]

In 2005, Southgate, in his God, Humanity, and the Cosmos, noted that in 1984 Robert Russell developed the theory that a future universal eschatological state will be characterized by a suspension of the second law of thermodynamics. [2]

In 2008, Southgate, in his The Groaning of Creation: God, Evolution, and the Problem of Evil, discussed views on the second law of thermodynamics in the context of evil, e.g. the problem of evil, and other religious thought. [3]

Quotes | Cited
The following are quotes cited by Southgate:

“Should the final future as forecasted by the combination of big bang cosmology and the second law of thermodynamics come to pass, then we would have proof that our faith has been in vain. It would turn out that there is not God, at least not the God in whom the followers of Jesus have put their faith.”