In hmolscience, Church of Elective Affinities or “Church of the Elective Affinities” is the place or conceptualization, philosophical or actual, wherein Mary Shelley, in her posthumous existography of her husband Percy Shelley, “Britain’s most famous atheist”, alluded to or insinuated that she and him were married in, abiding in the principles of elective affinities.

In 1758, German polyintellect Johann Goethe, age 9, as described in his Dichtung und Wahrheit, in poetic language, built his own altar to nature out of his father’s natural history collection, surmounting it with sulfur, and lit a candle, when making his devotions; his readings of the works of Benedict Spinoza later confirmed these feelings.

In 1796, Goethe began ferreting out the outline of an "elective affinity" based model of the passions; the result of which was his 1809 physical chemistry based novella Elective Affinities, which shows how to upgrade the ten commandments via "what nature teaches the creatures it makes" (Positions of Rights, 1777).

Shelley
In 1804, English romantic poet and philosopher Percy Shelley, age 14, entered Eton College, during which time he translated half of Pliny’s Natural History, spent his money on books, chemical instruments, and acts of liberality; one of his oft-spoken pronouncements during this time was: [3]

“Nothing ever delighted me so much as the discovery that there were no elements of earth, fire, or water.”

In 1806, age 16, Shelley entered Oxford University, where his favorite amusements were chemistry, microscopic investigations, and boating.

In 1811, Shelley, age 19, penned "The Necessity of Atheism", wherein he does a modern physical science based upgrade of Francis Bacon style atheism, affirmatively states "there is no god", questions the existence of "life" amid a materialism view, and derides the supposition of afterlife with recourse to elements, reduction, and science; an exert of which is as follows:

“It has been the persuasion of an immense majority of human beings in all ages and nations that we continue to live after death that apparent termination of all the functions of sensitive and intellectual existence. Nor has mankind been contented with supposing that species of existence which some philosophers have asserted; namely, the resolution of the component parts of the mechanism of a living being into its elements, and the impossibility of the minutest particle of these sustaining the smallest diminution. They have clung to the idea that sensibility and thought, which they have distinguished from the objects of it, under the several names of spirit and matter, is, in its own nature, less susceptible of division and decay, and that, when the body is resolved into its elements, the principle which animated it will remain perpetual and unchanged. Some philosophers and those to whom we are indebted for the most stupendous discoveries in physical science suppose, on the other hand, that intelligence is the mere result of certain combinations among the particles of its objects; and those among them who believe that we live after death recur to the interposition of a supernatural power, which shall overcome the tendency inherent in all material combinations, to dissipate and be absorbed into other forms.”

In 1816, Shelley, age 24, shortly after the 10 Nov 1816 suicide of his first wife Harriet Westbrook (1795-1816), with whom he had two children, married Mary Shelley [Mary Godwin] in which Mary Shelley retrospectively refers to as the "Church of Elective Affinities".

In 1839, Mary Shelley, in her “Memoir of Shelley” (Ѻ), who has passed in 1822, age 29, amid a boating accident (or suicide), writing in the third person, gives a short existography of Percy Shelley, particularly during his tumultuous years, and seems to speak in a mutual language of chemical philosophy, particularly where she says that they were married in the “Church of Elective Affinities” as seems to be the case: [3]

“It is a little odd, considering Shelley's "opinions about marriage", that he should have been married twice to his first wife. After their return from Gretna Green, the ceremony was performed again at Cuckfield in Sussex. For some time, he seems to have led a rather migratory life. We find him for a time at Keswick, where he became acquainted with Southey, for whose poetry he had at this time an extravagant admiration; then in Dublin, projecting histories of Ireland, which result in a small political pamphlet, now irrecoverable; then in the Isle of Man, as a kind of Alsatia, sacred from the foot of bailiff; and last in Wales, whence he appears to have come to London again.

The results of this marriage were two children, a daughter and a son, and a separation. The circumstances of the disagreement between Shelley and his wife, have never been cleared up. Perhaps it would have been quite as noble if Shelley had continued the martyr of a youthful misstep instead of making his wife the victim of notions about marriage in which there is no evidence that she shared. However this may be, he made himself so acceptable to Miss Godwin, daughter of the novelist and Mary Wolstonecraft, that she consented to elope with him to Switzerland in July, 1814. They crossed to Calais in an open boat, not without danger of being lost. A Miss Claremont went with them. She also was a deaconess in the Church of the Elective Affinities, and (Lord Byron having joined the party) became the mother of the Allegra, mentioned in his will. This, however, seems to have been on a second visit to the Continent, the fugitives having in the meanwhile returned for a short time to England. This last continental tour occupied but a few months, during which the northern part of Italy was visited.

Shelley came back to England again, bringing with him a child by his new connection, and went to Bath. But now was to come the terrible recoil which almost inevitably results from an attempt to bend an entire social system out of the way of the passions of a single man. However the brain may philosophize, the heart remains loyal to its traditions, and though Mrs. Shelley [Harriet Westbrook] may have been captivated with the doctrine of attractions while it drew her husband to her, she was not prepared for the more liberal application of it which drew him away. No theorizing can sweeten desertion; and the unhappy woman, disenchanted of the dream, and forsaken by the substance, sought shelter in death.

The lovers of Shelley as a man and a poet have done what they could to palliate his conduct in this matter. But a question of morals, as between man and society, cannot be reduced to any individual standard however exalted. Our partiality for the man only heightens our detestation of the error. The greater Shelley's genius, the nobler his character and impulses, so much the more startling is the warning. If we make our own inclinations the measure of what is right, we must be the sterner in curbing them. A woman's heart is too delicate a thing to serve as a fulcrum for the lever with which a man would overturn any system, however conventional. The misery of the elective-affinity scheme is that men are not chemical substances, and that in nine cases in ten the force of the attraction works more constantly and lastingly upon the woman than the man. There is no stronger argument against it than the Memoirs of Mary Wollstonecraft (1798) (Ѻ). The Mormon polygamy is nothing more than a plant from the same evil seed sown in a baser soil, and is an attempt to compromise between the higher instincts of mankind, organized in their institutions, and the bestial propensities of sensualized individuals.

The suicide of Shelley's wife took place on the 10th of November, 1816, and shortly afterward he married Miss Godwin [Mary Shelley], at her father's solicitation, and took up his abode at Great Marlow in Buckinghamshire. His means of support were ample, as he had succeeded to some property in his own right which yielded a yearly income of one thousand pounds. During his residence here the custody of his two children by his first wife was taken away from him by a decision of the Lord Chancellor Eldon, on the ground of atheistical principles attributed to their father. Shelley felt this deeply, and all his life.”

Goethe | Shelley
Shelley’s social “elective affinities” model, derived from the physical sciences, seems to have been done parallel, yet independent, from that done by Goethe. Shelley scholar Teddi Bonca (1999) reasons that Shelley “may or may not have read” Goethe’s Die Wahlverwandtschaften [Elective Affinities]. [4] Goethe’s work, however, was not available in English until 1854 [James Froude]; and Shelley was known only to read German when the translations where available.

Related
In 1910, German physical chemist Wilhelm Ostwald, was giving his "Monistic Sunday Sermons", on how energy-based monism replaces theism, and the repercussions and details of this view; a type of natural science based atheism Sunday school, so to say, devoid of any supernatural suppositions; a visual synopsis of which is as follows: 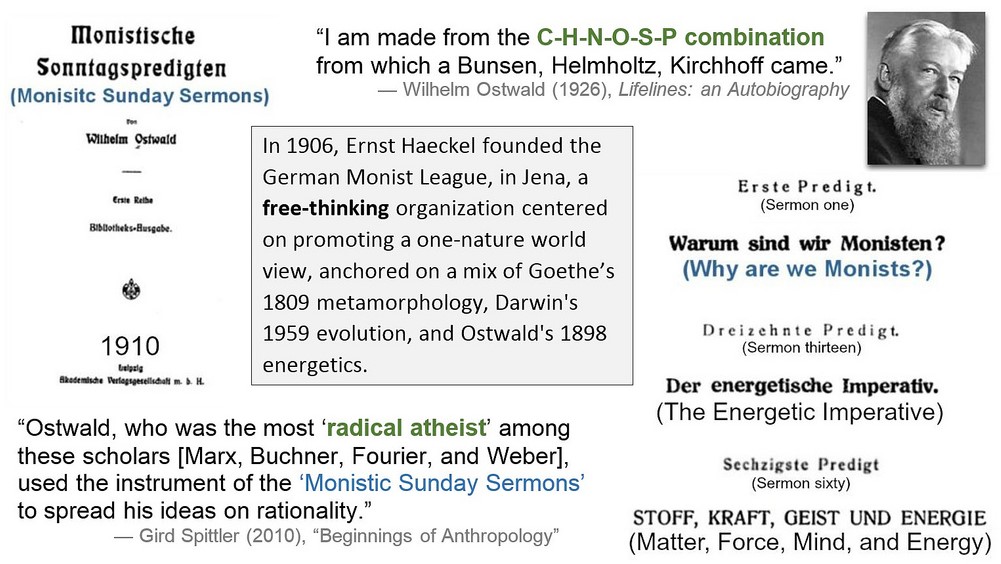 In 2007, American historian William Jensen drew the following caricature of Gilbert Lewis, shown above, as the prophet or preacher of the new or future brand of atheistic physiochemical-based religion:

In 2010, English atheists and comedians Sanderson Jones and Pippa Evans (Ѻ), during an Oct drive to Bath, conceived the idea for an “atheist church” per the following logic: (Ѻ)

In 2013, longing for that sense of community they used to have as believers, the launched the first started so-named Sunday Assembly (Ѻ), the first of which occurred in London; crowds later drawing some 300 to 500 people.