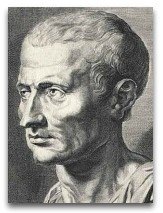 In existographies, Marcus Tullius Cicero (106-43BC) (IQ:180|#103) (Cattell 1000:15) [RGM:116|1,500+] (Stokes 100:13|Stoics) (GPhE:#) [CR:200], aka "Tully", was a Roman philosopher and politician, noted for his 45BC On the Nature of the Gods, a discourse on Greek and Roman theologies, namely a dialogue on a comparison of the pros and cons of stoicism (character: Balbus), Epicurean theology (character: Velleius), and Platonic Academy based skepticism (character: Cotta); also known for thoughts on morals, society, the legal system, etc., as both religion and and Epicurean atomic theory would each see things.

Heat | Life
On heat and life, Cicero says the following:

“When the heart has been plucked out of a living creature, it pulsates with such rapid movement as to resemble a flickering flame. Therefore, every living thing, be it animal or vegetable, lives because of the heat enclosed within it. This forces us to the conclusion that the element heat possesses within it a life-sustaining force which extends throughout the whole universe.”

In commentary on this, Patrick Walsh (1997) states that the ultimate citation for this view is Heraclitus, and also that Aristotle develops this argument in De Anima (2.8) and elsewhere.

On Fate
In 45BC, Cicero published On Fate, wherein, supposedly, he coins (§:II.i) the term "moral" and "moral science".

On Moral Ends
In 45BC, Cicero published On Moral Ends, wherein he gives objection to Greek philosopher Epicurus’ circa 280BC “swerve of the atom” theory of free will and, supposedly, soul, arguing that if it was necessary first to go all out for natural law to dispense with divine intervention by gods then suddenly and capriciously cancel out all of this beautiful logic by inventing an uncaused swerve, then the entire atomic theory of Leucippus, Democritus, Epicurus, and Lucretius was probably after all just so much “childish fancy”. [1] Cicero devotes a number of pages of discussion to compare and contrast Democritus with Epicurus. [3] Swerve issue aside, Cicero seems to have been in favor of Lucretius: [2]

“The poetry of Lucretius is, as you said in your letter, rich in brilliant genius, yet highly artistic.”

Gods | General
In 45BC, Cicero published On the Nature of the Gods (De Natura Deorum), a discourse on Greek and Roman theologies, namely a dialogue on a comparison of the pros and cons of stoicism (character: Balbus), Epicurean theology (character: Velleius), and Platonic Academy based skepticism (character: Cotta); the following are representative quotes:

“Protagoras however professed himself in doubt on the matter and Diagoras of Melos and Theodorus of Cyrene did not believe them to exist at all.”

“And when these [religious rituals] are gone, there is anarchy and complete confusion in our way of life. Indeed, I do not know whether, if our reverence for the gods were lost, we should not also see the end of good faith, of human brotherhood, and even of justice itself.”

“From me you will get no mere figments of the imagination, such as the god whom Plato describes in his Timaeus as the creator and artificer of the world, or the fortune-telling old which whom the Stoics call ‘providence’, or some theory of the universe being itself endowed with mind and senses [Anaxagoras], a sort of spherical, incandescent and revolving god. All such marvels and monstrosities are as these are not philosophy by merely dreams.”

“In this immensity of breadth and length and height there swarms the infinite power of atoms beyond number, and although they move in vacuum, they cohere amongst themselves, and then are held together by a mutual attraction. Thus are created all the shapes and forms of nature, which you imagine can only be created by some divine blacksmith with his anvil and his bellows! So you have smuggled into our minds the idea of some eternal overlord, whom we must fear by day and night. Who would not fear a god who foresees everything, ponders everything, notices everting? A god who makes everything his own concern, a curious god, a universal busy body? Epicurus has saved us from all such fears and set us free.

“What a fortunate clash of atoms, from which suddenly men are born in the image of gods! It is egocentric to imagine our own shape as that of the gods. No doubt ants feel the same way.”

“It is obviously true, as our mutual friend Posidonius [c.135-51BC] (Ѻ) argued in the fifth book on the nature of the gods, that Epicurus did not believe the gods existed at all and that what he said about them was merely to avoid the odium of atheism.”

“That which we call ‘nature’ is therefore the power which permeates and preserves the whole universe, and this power is not devoid of sense and reason.”

“Is it not a wonder that anyone can bring himself to believe that a number of solid and separate particles by their chance collisions and moved only by the force of their own weight could bring into being so marvelous and beautiful a world. If one believes such a thing possible, I cannot conceive why one would not believe as well that by haphazardly throwing a vast quantity of the twenty-one golden letters onto the ground, the result could be Ennius’ Annals, such that they could then be read. I doubt if chance could by itself complete even a single line.”

French thinker Voltaire described On the Nature of the Gods as “perhaps the best book of all antiquity.” [6]

In 2004, Jennifer Hecht, inspired by the Cotta character, penned Doubt: a History, an attempt to upgrade of Cicero's On the Nature of the Gods.

Atheism
Cicero, supposedly, was first to transliterate the Greek word ἄθεος, from the privative ἀ- + θεός "god", meaning "godless", into the Latin átheos (Ѻ), i.e. to introduce the "atheism" to the modern western world.

Throwing letters | Typing monkeys
Cicero, in his treatises On the Nature of the Gods or On Destiny, seems to be the originator of the famous typing monkeys example: [8]

“If one believes such a thing possible, I cannot conceive why one would not believe as well that by haphazardly throwing a vast quantity of the twenty-one letters onto the ground, the result could be Ennius’ Annals, such that they could then be read. I doubt if chance could by itself complete even a single line.”

To each his own
In 45BC, Cicero, in his On the Nature of the Gods, introduced the phrase Suum cuique (Latin) or as now commonly known: [4]

Cicero, supposedly, again also uses this "to each his own" phrase in his 43BC On the Laws (De Legibus), only partially finished at the time of his assignation. [5]

Goethe, in scene 16 of Faust, seems to vicariously cite Cicero’s to each his own idiom, as to the gods, via the following dialogue: [7]

Faust: What I can!

Margaret: How is't with thy religion, pray?
Thou art a dear, good-hearted man,
And yet, I think, dost not incline that way.

Faust: Leave that, my child! Thou know'st my love is tender;
For love, my blood and life would I surrender,
And as for Faith and Church, I grant to each his own.

Margaret: That's not enough: we must believe thereon.

Discovery
In 1345, Petrarch, after years of searching in monasteries and libraries, found a volume of the lost letters of Cicero. [1] Some have credited this with initiating the renaissance (compare: Poggio Bracciolini). Petrarch, supposedly, had a list of books, among with Cicero's On the Nature of the Gods, was one of his favorites.

Reaction end
In 43BC, Cicero, after getting on the wrong side of Augustus Caesar, was put to death (or assassinated).

Quotes | On
The following are quotes on Cicero:

“Cicero provided the ‘renaissance’ with its prime methods of philosophical dialogue, and its fullest knowledge about the ancient philosophical schools.”

“Cicero’s Tusculan Disputations (Ѻ) and On the Nature of the Gods are the supreme manifestations of human wisdom, and of the two, the latter ranks higher.

Quotes | By
The following are quotes by Cicero:

“We must perpetuate religious belief, which is closely associated with the knowledge of nature, but we must likewise eradicate superstition root and branch.”

“If you give way to superstition, it will forever haunt you. I you go to a prophet, or regard omens; if you sacrifice or observe the flight of birds; if you consult an astrologer or Haruspex; if it thunders or lightens, or any place is consumed with lightening, or such-like prodigy happens all the tranquility of the mind is destroyed. And sleep itself, which seems to be an asylum and refuge from all trouble and uneasiness, does by the aid of superstition increase your troubles and fears.”

“These writings are mere copies, produced with no heavy labor; I supply only the words, of which I have a rich store.”

“I myself tend to disapprove of the alleged practice of the Pythagoreans: the story goes that if hey were maintaining some position in an argument, and were asked why, they would reply: ‘the master said so’, the master being Pythagoras.”

“When we engage in argument we must look to the weight of reason rather than authority. Indeed, students who are keen to learn often find the authority of those who claim to be teachers to be an obstacle, for they cease to apply their own judgment and regard as definitive the solution offered by the mentor of whom they approve.”

“Britons are too stupid to make good slaves.”

“If no use is made of the labor of past ages, the world must remain always in the infancy of knowledge.”

Further reading
● Cicero. (45BC). On the Nature of the Gods (translated with notes critical, philosophical, and explanatory by Thomas Franklin, to which is added an Inquiry into the Astronomy and Anatomy of the Ancients). William Pickering, 1829.
● Cicero. (45BC). The Nature of the Gods (Introduction, translation, and notes: Patrick Walsh) (pg. xxvi). Oxford University Press, 1998.