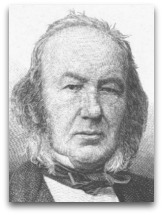 In existographies, Claude Bernard (1813-1878) (IQ:160|#501) (Murray 4000:12|B) (CR:24) was a French physiologist, the "founder" of general physiology (Henderson, 1927), noted for his views on relation of chemistry, heat, and life; commonly known for his "homeostasis" theory, namely that the hypothesis that "stability of the internal environment [the milieu intérieur] is the condition for the free and independent life". [7]

Overview
In circa 1870s, Bernard produced some ripe defunct theory of life like stylized physiology works; some representative quotes are as follows:

“We must not read into [living organisms] either a chemical retort or a soul: we must read into them what there is.”

“The metaphysical evolutive force by which we may characterize life is useless in science, because, existing apart from physical forces, it can exercise no influence upon them.”

On the subject of ‘life’, Bernard, according to American science historian Everett Mendelsohn (1964), gives discussions of how the term ‘life’ is nothing but a word which means ignorance, but a term nevertheless closely associated with heat. [1]

French writer Emile Zola, in his literature chemistry essay “The Experimental Novel” (1880), stated that his great source of inspiration as a novelist was Bernard, owing to his study of the chemistry of the body.

Henderson
Bernard's work on equilibrium physiology in the animal body, particularly his view that biology could profit from the application of the rigorous methods of physics and chemistry, and its later exegesis by Walter Cannon, at Harvard, became one of the two backbone theories, along side that of Willard Gibbs, employed by Lawrence Henderson. [3]

Quotes | On
The following are notes of praise or tribute:

“Claude Bernard—the successor to von Baer and Bichat—is a great man, whose purely mechanistic researches stand at the foundation of many departments of physiology.”

“Science was seen by Claude Bernard with clear but prophetic vision, for he lived almost a half-century before his time. He perceived that physiology rests securely upon the physico-chemical sciences, because all that these sciences bring to light is true of organic as of inorganic phenomena. Also there is nothing but the difficulty of the task to hinder the reduction of physiological processes to physical and chemical phenomena.”

“If Pareto had truly joined the social sciences to the natural sciences, an achievement Henderson very much wanted to see, it is only to be expected that he would put Pareto in the great company of Gibbs, Bernard, and even Newton.”

Quotes | By
The following are quotes by Bernard:

“It is what we know already that often prevents us from learning.”

“Man can learn nothing except by going from the known to the unknown.”

“Observation is a passive science, experimentation an active science.”