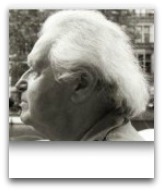 In human chemistry, Claus Bock (1926-2008) was a German scholar, who read Nietzsche for pleasure (Ѻ), noted his his 1960s mentoring of Jeremy Adler in his historical on the chemistry background of the theory behind Goethe's Elective Affinities.

Overview
In the 1960s, Bock doctoral adviser to Jeremy Adler and suggested decisively to him that he do his PhD dissertation on the chemistry theory (see: Goethe's human chemistry) used by German polymath Johann Goethe in the scripting of his 1809 novella Elective Affinities, the founding book of the science of human chemistry. [1] One of Bock’s interests in his occupation as a professor of German literature was Goethe. Bock, for instance, was the compiler of the 1960 book Goethe the Critic. [2]

Education
In the early 1950s, Bock studied with Ronald Peacock at Manchester University, attracted by the latter's research on Hölderlin, and obtained a PhD at Basle under Walter Muschg. After working briefly as an assistant lecturer at his Alma Mater, he became a lecturer at Queen Mary College, London (1958), then reader (1964), and finally professor of German, Westfield College, London (1969).