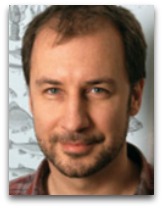 In science, Claus Wedekind (c.1967-) is a Swiss mate selection researcher noted for his 1995 Sweaty T-shirt study, wherein he found the result that women—not on the contraceptive pill—were most sexually attracted to males in possession of the most dissimilar major histocompatibility complex (MHC). [1]

In the study, Wedekind and his team collected DNA samples from 49 female students from the university, mostly in biology and psychology, and 44 male students, mostly from chemistry, physics and geography (see also: Beckhap's law). He asked the men to wear cotton T-shirts on a Sunday and a Monday night, to keep the shirt in a plastic bag, to use perfume-free detergents and soaps and to avoid smelly rooms, smell-producing foods and activities, like smoking and sex, that create odors. Meanwhile, the women were given a nasal spray to use for two weeks before the test to protect their nasal membranes from infection. They also each got a copy of the Patrick Suskind novel ''Perfume'' to make them more conscious of odors.

After the T-shirts were collected, each woman was asked to give ratings, for intensity, pleasantness, and sexiness, to three T-shirts from men with similar MHC genes and three from men whose MHC genes were less similar. They did not know which shirts were which. Wedekind and his colleagues famously reported the following result in the 1995 Proceedings of the Royal Society of London: [2]

“Women who are not taking oral contraceptives and who are dissimilar to a particular male's MHC perceive his odor as more pleasant than women whose MHC is more similar to that of the test man.”

In the two decades to follow, numerous extensions of this work followed, including at the launching of at least two operational gene-matching science-based dating sites, namely the 2003-launched GenePartner.com and 2007-launched ScientificMatch.com.

Education
Wedekind completed his PhD in 1994 with a dissertation on “The Extended Parasite Hypothesis for Sexual Selection: Selection for Complementary Disease” at the University of Bern. Currently, he is a professor of biology at the University of Lausanne, with research focus on the selective forces that currently act especially on fish populations, e.g. the effects of human activities in interaction with natural and sexual selection; and the evolution of cooperation in conflict situations.