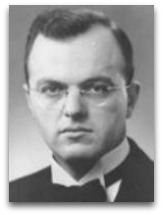 In existographies, Clifford Ambrose Truesdell III (1919-2000) (CR:6) was an American mathematician noted for his 1969 Rational Thermodynamics and predominately for his 1980 Tragicomical History of Thermodynamics. [1]

Rational thermodynamics
In 1952, Truesdell, in a footnote, stated the following: [2]

“The rational student must cleave the stinging fog of pseudo-philosophical mysticism which hides this statement [of the second law] in the usual physical treatments.”

This view may be from whence the subject of 'rational thermodynamics' stems in premise, of which Truesdell seems to be the creator. [4] Truesdell is also noted for his summary of the thermodynamic views of French marine engineer Ferdinand Reech (1805-1884) (or Frederick or Frédéric). [5]

Education
Truesdell completed a BS in mathematics, BS in physics, and MS in 1933, in mathematics, each at California Institute of Technology, and his PhD in mathematics from Princeton University in 1934. [2] Truesdell was a one-time mentor to German physicist Ingo Muller, author of the 2007 History of Thermodynamics. [3]

Quotes | On
The following are quotes on Trusedell:

“Of particular note [in respect to attempts at the origins of thermodynamics] is Clifford Truesdell's exceedingly strange book, The Tragicomical History of Thermodynamics. Truesdell is bombastic, judgmental, and sesquipedalian, and a terrible scold to boot. He writes in a constant state of exasperated wonderment that men such as Carnot, Joule, Kelvin, Clausius, and Rankine were unable to see clearly all the things that are so apparent to him. He takes the line that no law is a good law until it has been given rigorous mathematical expression and for this reason tends to underestimate the value and difficulty of coming up with new physical concepts. His judgments as a result are idiosyncratic and questionable, but his detailed dissection of the many papers contributing to the foundation of thermodynamics is nonetheless illuminating.”

“I hesitate to use the terms ‘first law’ and ‘second law’, because there are almost as many ‘first laws’ as there are thermodynamicists, and I have been told by these people for so many years that I disobey their laws that now I prefer to exult in my criminal status and non-condemning names to the concrete mathematical axioms I wish to use in my outlaw studies of heat and temperature. The term ‘entropy’ seems superfluous, also, since it suggest nothing to ordinary persons and only intense headaches to those who have studied thermodynamics but have not given in and joined the professionals.”

“The second new line of thought was initiated by Gibbs (1873, 1875/1878). This shy and exotic newcomer found himself before the altar of a goddess far from virgin, her morals eroded by callous abuse and her territory shrunk by the timorosity of her champions. There were two easy possibilities: to set out on a campaign to rejuvenate the goddess and re-conquer her lost dominions, or to make her an honest old lady in a safe and clean cottage. Gibbs chose neither. Perceiving that results like those obtained in the thermodynamics of processes in bodies of especially simple material ought hold also for all bodies in equilibrium, he created a pure statics of the effects of temperature and heat. Accepting the restrictions Clausius had imposed one by one in his years of retreat from irreversible processes, Gibbs recognizes the subject in its starved and shrunken form as being no longer the theory of motion and heat interacting, no longer thermodynamics, but only the beginnings of thermostatics. It is Gibbs' singular merit to have seen the essence of this thermostatics: a variational definition of equilibrium, including its stabilities and instabilities, in which infinitely many putative equilibria are compared, and variational criteria are imposed to select from this class of fields that which, for a given caloric equation of state, corresponds to actual equilibrium, namely that field of fixed total energy which renders the total entropy a maximum. A competitor is not required to obey "equations of state" and need not be the outcome of any process undergone by the body in question.”

“Thermodynamics is the kingdom of deltas.”