In engineering, condenser is the part of the heat engine or steam engine that cools the steam or working body via the use of surrounding cold water, aka the cold body, typically.

Overview
In c.1699, Thomas Savery had built his steam engine (see: Savery engine), as shown below, which operated such that steam was made in the boiler C, by boiling water over a fire, and through the connecting pipe E, the steam was put into the “receiver” B, which was then sealed shut, or disconnected form the boiler, after which valve F was turned thus letting a cooling fountain spray fall upon the outside of the receiver, which thus cooled the “working body” of steam in the receiver, thereby producing a “vacuum”, thus enabling his engine to “work” or mechanically pump or lift a certain amount of water out of flooded mines: 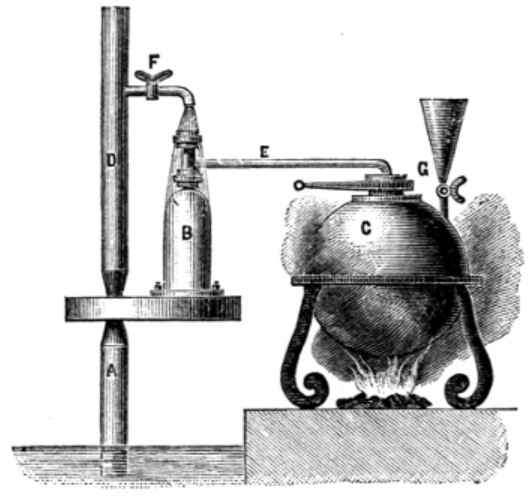 In 1765, James Watt, after ruminating about the above design, envisioned the idea that if would save time and be more economically efficient if the working body of steam in the receiver or volume of space inside the piston and cylinder were transmitted into a new container and “condensed” therein, by cooling water, thereby allowing the piston and cylinder to remain hot, thus saving a loss of heat to waste; the thereafter built the “condenser” as shown below: 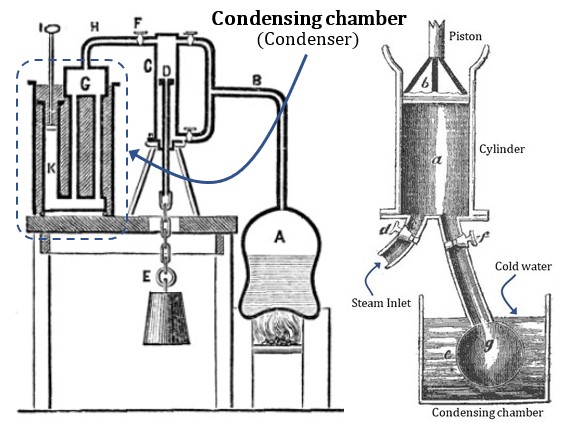 “Barometer gauge. This is an instrument to indicate the degrees of exhaustion within the condenser; it is constructed like a weather-glass or barometer, except that the upper end of the glass tube communicates by a small copper pipe with the condenser: the lower end of the glass tube is open, and is immersed in mercury contained in a small cistern or basin, the surface being exposed to the atmospheric pressure. The glass tube, which is about 32-inches long, is placed in a perpendicular direction, and the copper pipe from the condenser is very closely cemented to the glass at the upper end. When the engine is at work, and a vacuum is formed in the condenser, the barometer tube is exhausted, so that the surface of the mercury in that tube is relieved from pressure, and the weight of the atmosphere which presses upon the surface of the mercury in the basin, causes a column thereof to mount up in the tube, to a greater or less height according as the vacuum in the condenser is more or less perfect, and according to the weight of the atmosphere, which will be shown by a common Torricellian barometer or weather-glass.