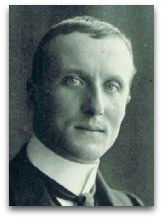 In existographies, Constantin Caratheodory (1873-1950) (CR:16) was a German mathematician, a student of the Berlin school of thermodynamics in 1900, who is noted for his pure axiomatic mathematical interpretation of thermodynamics, specifically his so-called Caratheodory's theorem (or theorem of Caratheodory, as it has come to be called), centered around a proof of the necessary relation between the Pfaffian form, differential quantities of heat, and the integrating denominator. [1]

Overview
In Xirokrini on the Bosphorus, Caratheodory worked from July to September 1908 on his "Studies in the Foundation of Thermodynamics", which he completed in Bonn of that year, published as a 31-page article in the German journal Mathematische Annalen in 1909. [2] During this period, he became officially a professor on October 3rd, 1908, after lecturing in Bonn for two months. Caratheodory commented on this work that it was the only work that he had thought through from the beginning to the end before writing it down. He also commented:

“We can derive the whole theory, without assuming the existence of heat, i.e. a physical quantity that differs from the usually mechanical quantities.”

In his work he reformulated the first and second laws of thermodynamics as the first and second axioms. He then introduced two assumptions differing from the traditional approach, one that heat was reduced to mechanical work and second that the system was treated mainly as an adiabatic process instead of a cyclic process. [1]

In 1939, Indian-born American astrophysicist Subrahmanyan Chandrasekhar gave the first English presentation of Carathedory's 1908 article in his chapter one to his An Introduction to the Study of Stellar Structure.

Of note, there does not seem to exist a readily available full English translation of Caratheodory's original article, and most commentary on his work is of a secondary nature. [3]

Quotes | On
The following are quotes on Caratheodory:

“The problem as it seemed to many scientists was to explain in terms of the real laws of physics (like Maxwell’s and Einstein’s) why entropy never decreased. Perhaps the most penetrating analysis of this question was given in 1909 by the German mathematician C. Caratheodory. His work did not commend itself generally, however, because it did not arrive at the wanted result. What Caratheodory proved was that either entropy could never decrease or it could never increase, but he couldn’t say which! To agree with the observed situation, it was still necessary to make an arbitrary choice.”