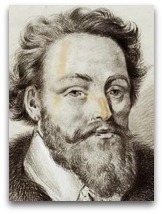 Pump | Clock
In 1598, Drebbel had a patent for a pump and clock with, supposedly, a claimed perpetual motion. [8]

“That musical instrument invented by Cornelis Drebbel, which being set in the sun shine, would of itself render a soft and pleasant harmony, but being removed into the shade would presently become silent. The reason was this, the warmth of the sun, working upon some moisture within it, and rarifying the inward air unto so great an extension, that it must needs seek for a vent or issue, did thereby give several motions unto the instrument.”

The device, in all likelihood, was built on one of Hero's musical devices, presuming Drebbel read his work.

Thermostat | Circulating oven
In c.1620, Drebbel built, supposedly, a circulating oven, with a thermometer, and thermostat, for incubating chicken eggs. [7]

“It is certain that Drebbel, that great, singular, learned mechanician, did by help of this instrument [thermometer] make a dial continually to move of itself regularly showing both the time of the day and the motions of the heavens.”

Microscope
Drebbel is said to be one of the early inventors of the microscope. [2]

“Cornelis Drebbel, Zacharias Janssen, Galileo Galilei, and Robert Hooke are some of the scientists credited with the invention and development of microscopes. Robert Hooke's book, Micrographia, published in 1665, depicted his microscopic observations and was one of the best sellers of that time. However, the adaptation of microscopy was greatly impacted by Antonie Leeuwenhoek, a Dutch fabric merchant. Referred to as the 'father of microbiology'; he was neither a biologist nor the inventor of the microscope, though he is responsible for some of the greatest improvements to the tool.”

“Sometime after 1620, Dutch scientist Cornelis Drebbel is said to have made a boat which ‘swam under water’ of the Thames from Westminster to Greenwich.”

There is some conjectural detail, as recorded by Robert Boyle (1662), as told to him by an “excellent mathematician” who had been on one of Drebbel’s submarines, that Drebbel had, on board the submarine, a “chemical liquor” that when unstopped would replace the “quintessence of air” and able to “cherish the vital flame residing in the heart” and in effect allow people to breath oxygen under water. [5] The chemical liquor was supposedly obtained by heating saltpeter, i.e. potassium nitrate (KNO3), the chemical reaction (Ѻ) of which is:

The following is one summary of this:

“Joseph Priestley is usually associated with the discovery of oxygen in 1774. Nowadays, it is generally recognized that Scheele should be credited with this discovery. Furthermore, Lavoisier's experiments on oxidation led to the evolution of the ‘new chemistry’ as we know it today. Yet some of these chemists were not the first who prepared oxygen from its compounds or who studied its properties. Almost two centuries earlier it was a Dutchman Cornells Drebbel (1572-1633) who prepared oxygen by heating saltpeter, a method still used today.”