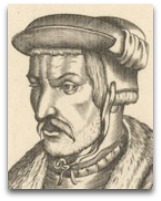 Quotes | On
The following are quotes on or about Magnus:

“When I, Victor Frankenstein, returned home my first care was to procure the whole works of this author [Cornelius Agrippa], and afterwards of Paracelsus and Albertus Magnus. I read and studied the wild fancies of these writers with delight; they appeared to me treasures known to few besides myself. I have described myself as always having been imbued with a fervent longing to penetrate the secrets of nature. In spite of the intense labor and wonderful discoveries of modern philosophers, I always came from my studies discontented and unsatisfied. Sir Isaac Newton is said to have avowed that he felt like a child picking up shells beside the great and unexplored ocean of truth. Those of his successors in each branch of natural philosophy with whom I was acquainted appeared even to my boy's apprehensions as tyros engaged in the same pursuit.”

Quotes | By
The following are quotes by Agrippa:

“The knowledge of all sciences is so difficult, if I may not say impossible, that the age of man will not suffice to learn the perfection of one art as it ought to be: which Ecclesiastes seems to intimate, where he saith, ‘I beheld the whole work of god, that man cannot find out the work that is wrought under the sun; for the which man laboureth to seek it, and cannot find it: yea, and though the wise man think to know it, he cannot find it’.”