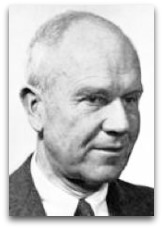 In hmolscience, Crane Brinton (1898-1968) was an American historian noted for his participation in the Harvard Pareto circle, for his later adoption of Pareto’s “circulation of elites” theory, as applied to revolutions, such as, supposedly, discussed in his The Jacobins (1930) and his “The Residue of Pareto” (1954) published in Foreign Affairs. [1]

Brinton established a friendship with Lawrence Henderson in 1918 which he maintained until Henderson's passing (reaction end) in 1942, the two often dining together and visiting each other at summer homes. In 1936, Brinton began to acknowledge Henderson's influence in his books. [2]